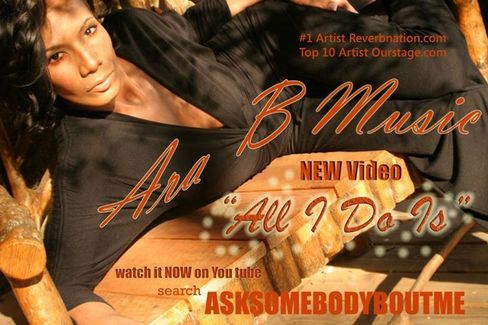 About Ara B Music

“Materializing my visions that's what music is about for me”

Rising Star Ara Bolster was quoted as saying in a recent interview. The Beautiful Singer/Songwriter/ Rapper extraordinaire has made a lasting impression on fans from Boston to Miami with her music that never seems to stay off the Indie charts. She has impressed so many with her vocal talents that she was recently asked to lend her vocal talents to Cirque Du Soleil’s "La Nouba" by the show’s talent scouts.

A well-known talent hailing from her hometown of Boston Massachusetts…,Ara began singing at the age of five years old; eventually singing the National Anthem as a regular for State and government functions while still a teenager. She branched out and became a popular singer in the suburbs and upper crust area’s of Brockton and the Cape.  Word of mouth began to tell of her talent and she began working with local producers after performing the National Anthem for a Pawtucket Red Sox Ball club game opener. Ara is a unique stylist but often states in interviews “I hate to be put in a box creatively” Born with a natural ear, the self trained songstress mastered harmony at a young age partly because of her musical heritage (Her father was a professional Jazz saxophonist) When Ara starts to sing the mood can be described as nothing less than sparkling!

In Ara Bolster one finds a first rate singer with first-class ambition, but as in everything worth having there has to be a certain amount of knowledge and patience when developing a talent and Ara has done just that over her twenty year singing and writing career. Her Time to face the spotlight cannot be denied when she belts out songs as a powerhouse vocalist. She can wend her way around a song showing off an amazing range vocally from a slow rising soubrette ballad to an awe inspiring dramatic gospel.

Dynamic technique and full sultry timbre are the hallmark of her performances and this prodigy is now number 1 on the Reverbnation Soul charts with her single “It’s Time” from her debut Album “It’s Time”.