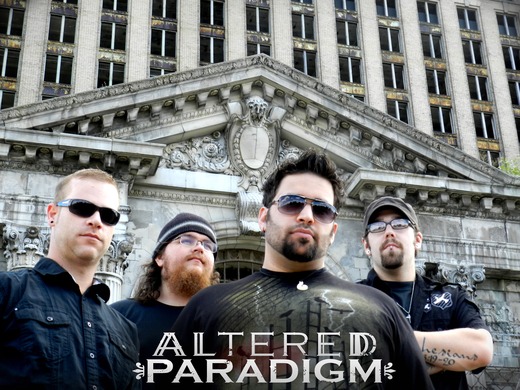 “If you had three and a half minutes to tell the world your real thoughts, your real feelings, show the world the real you, what would that sound like?” That’s how singer/guitarist Brad Stuart describes the passion behind the band’s music.

Altered Paradigm was formed in 2006. Members Brad Stuart, Josh Nalian, Eric Miller, and Scott Strohschein came together to create their unique twist to rock and roll. They have derived their sound from the diverse pool of musical influences and backgrounds each member comes from.  However, the band is not only known for its unmistakable hard edge sound pounding through the stereo, but also for their unforgettable grinding performance. Releasing their debut album “Faded”, Altered Paradigm hit the Detroit music scene hard and put them on the map nationally in no time. The band spent almost 3 years on the road touring nationwide and taking the stage with some of the biggest bands in the industry.

After much success with “Faded”, it was time for round two.  From day one, the band has had a ‘face to the grindstone’ mentality so it’s no surprise that they are climbing so quickly with the release of “Along The Wire.”  Not only have they been able to recapture the national media, but now have branched out into the international music scene.  Josh Nalian expressed his excitement saying, “It’s amazing to be back out on the road, reconnecting with old fans, and meeting new ones. We always strive to write and perform at our absolute max potential.  To have people all over the world love the music as much as us is just a dream come true.  We owe so much to our die hard following.  That’s where so much of our success stems from.”

It’s undeniable that Altered Paradigm has a great start to the legacy they are creating and a hopeful future of years to come. With just two albums under their belt, only time will tell the true potential of this band.