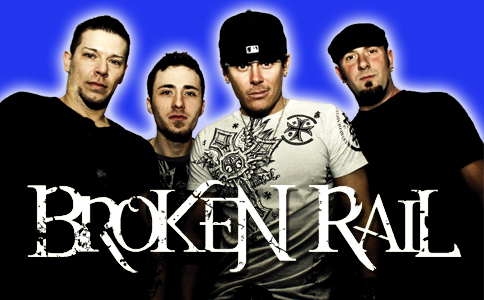 Alabama rockers, BrokenRail was formed in 2008 by an all-star unit of musicians with the sole intention of rising to the top and proclaiming their place in modern music with their infectious blend of hard rock and metal.

BrokenRail has grown their following extensively over the years throughout the world. The exposure allowed the band’s music to get featured on several notable platforms such as ESPN, NBC Sports, MMA’s World Series of Fightingas well as having the band nominated in 2016 and 2017 for the Alabama Music Award for “Rock Band of the Year”.

The band’s debut release, “Welcome To The Escape” came out in 2010 and made a strong impact for BrokenRail’s inception. The album was produced by Ben Trexel & Rick Beato (Shinedown, Crossfade). The band toured extensively throughout the Southern Regions before getting back into the studio for their sophomore album. BrokenRail teamed up with producer & engineer Brett Hestla (Framing Hanley) in 2011 to work on tracking and release for the EP "Never The Same". In 2013, the band release the single "When You Fall" while they ultimately headed to Los Angeles to work with producer Joseph McQueen (As I Lay Dying) on the new full length record. The final mixes were sent to Kane Churko (Papa Roach, As Lions) & Logan Mader (Gojira, Bullet For My Valentine) in Las Vegas which was completed in October of 2016.

In November of 2016, BrokenRail released a 3 track EP based off the upcoming album simply titled “BROKENRAIL” which was the first hint of the bands next full-fledged release. The release was to introduce a new and powerful direction for the band moving forward. The band released a music video for the single “Walk Again” which has attained tremendous responses from fans and press. With this EP, BrokenRail caught the attention of New York based Extreme Management Group Inc. and the partnership was inked in the summer of 2017.

BrokenRail have shared the stage with bands such as 12 stones, Eye Empire, The Veer Union, Taproot, Digital Summer, 3 Pill Morning, Super Bob, Almost Kings, Shallow Side, Artifas and many more. As of recent, the band has been on the National “Screaming Black Curse Tour” supporting All Hail the Yeti & Invidia.

The band is working to complete their 3rd studio album which will be the most predominant to date. With their extensive live history, BrokenRail is primed to support the release at a wider level and won’t let anything get in their way.