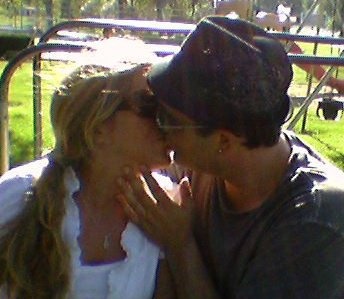 Nashville, TN - Always the entertainer at home, Derik's family and friends encouraged him to perform at parties and weddings, which by the time he was fifteen years old, included taverns and biker bars in and around Washburn, Illinois. Further encouraged by the other musicians and singers he performed alongside, Derik began making an almost annual trek to Nashville to "learn what the music business was all about." Accompanied by performer and mentor John Hartenbower, Derik first sang at Nashville's famous Tootsie's Orchid Lounge at sixteen years of age. Subsequent trips to Nashville led to performances at dozens of popular singer and songwriter havens, including the Broken Spoke where Derik met and shared his songs with a famous recording artist who was encouraged by the number of other singers and writers who shook his hand and wanted to hear more. Derik recorded some original songs and handed cassettes out to anyone who wanted a copy. This provided more welcomed feedback from professionals in Nashville which Derik not only embraced but absorbed. Theatrical work in high school including student directing, working in his family business, attending Illinois Central College, and live performances rubbing shoulders with some of the most talented writers, musicians, and singers in the music industry prepared Derik Schumacher well to breakout onto the music scene with an impact few "new" artists have known. In August of 2004 Derik came to Nashville to sing on three demonstration recordings at the invitation of a hit songwriter. This experience in the studio and the interest Derik received from a major record label prompted Derik to move his family to Nashville in October of 2004. At one early morning meeting after a late night writer's night Derik was introduced to a veteran record producer and publisher who immediately appreciated Derik's emotional intensity and "no fear" approach to songs, they began discussing working together to create an album. The result was a group of unique, fun, beautiful, and emotionally expressive songs written by some of the premier songwriters in the industry. Derik contributed two songs to the album as a songwriter. Derik's debut album was released by Indie label Modern Vinyl Music in November 2005. His self-titled album contained two patriotic tributes to veterans, which was embraced by service men and women worldwide. This led to many opportunities for Derik to expand his fan-base, which led to a successful radio campaign for the single "She's Got What Gets Me". As a result, Derik was featured on several nationwide radio programs and has been involved with several fundraising events. During this time, Derik was humbled by visits to many Veteran Homes and Hospitals and American Legions and V.F.W.'s nationwide. Derik was also asked to write a theme by the founder of Operation DVD, which is currently the opening music for their website OperationDVD.net. Most recently, Derik has spent the last year and a half writing and building his catalog of songs. His next venture is to release his next single "In Memory Of" to radio. Paul Davis and Derik Schumacher are co-writers of this song that has been dedicated to the brave men and women who were taken in the line of duty. Derik would love for you to stop by for a visit and urge you to help us "MAKE A DIFFERENCE" "In Memory Of" available to radio now at http://www.airplaydirect.com/DerikMatthewSchumacher. Currently Derik is working on material for his new album. Check out his youtube page for acoustic live versions of the new songs he plans on releasing by early 2012.