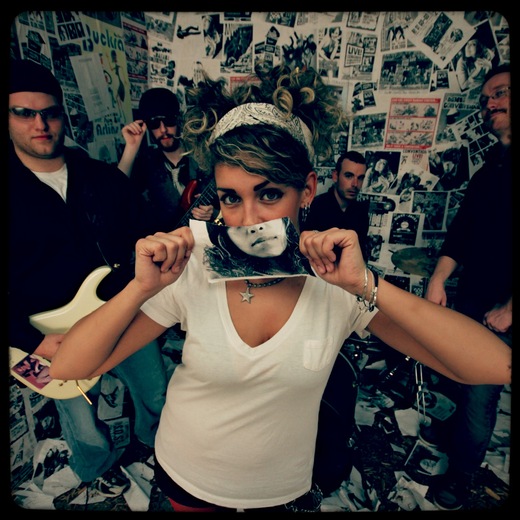 About The Banana Convention

Putting the "F-U" into "FUN"
It's the battle cry of The Banana Convention, the ambitious garage pop band from the scraggy rust-belt town of Saginaw Michigan. From New York to L.A., the band has dominated all stages. Whether it's local bars, The House of Blues, or The Van's Warped Tour, all venues that have hosted their musical mayhem witness performances that impress, express, and finesse. TBC is a naked clown car in your ears.

The rock 'n roll revelry is brought forward with a versatility that's lead by vocalist Shar Molina. She delivers pitch-perfect melodies with soul and power, spanning all musical styles. From a soft and beautiful ballad to the amped energy of the heaviest rock song, Shar lays out a siren's spell over her audience.

Percussionist Monte Nothelfer shakes up the entire band's foundation, backing up Molina with his unique vocal style and enigmatic charisma. Jake Voisine on guitar has been banned in several non-smoking establishments because his licks come so fast and furious that his guitar neck has been known to catch flame. Locking it down, Sean Drysdale's funky bass lines combined with the high octane fuel of Chris Howard's punk rock drums manufacture the tightest rhythm section on the scene
It's Weezer jello wrestling with No Doubt while The Presidents of the United States of America referees

The Banana Convention is absolutely an aural and performance extravaganza that keeps audiences just rocking the hell out.