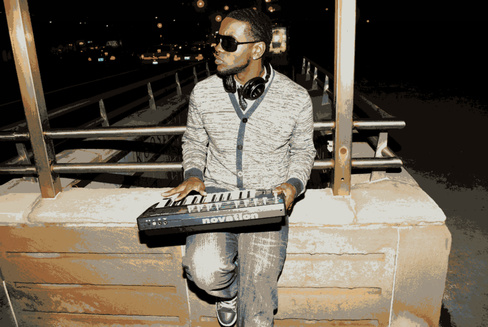 “Marko Pen” born Titus Ramiz Stubblefield was born in Louisville, Kentucky into a family of singers and musicians. Though he was a late bloomer in comparison to his siblings in embracing his musical gift, it was obvious to those around him that music was his destiny. He was raised by a single father who believed in nurturing his children’s musical creativity. His father eventually moved the family to Ohio where he surrounded them with musical instruments including pianos, drums, guitars, microphones, and recording equipment. Eventually Titus began to explore his abilities by singing the songs of his favorite artist and learning each instrument that was around the house all on his own. This later lead to him singing and playing drums at the church his family attended.

Unexpectedly, at the age of fifteen Titus lost his father due to a freak accident that caused medical complications. It was at this point that Titus began to reflect on the true purpose that his father felt music would play in his life. By this time he had migrated to St. Louis, Missouri to live with relatives. As the new kid in school he ran into a kid whom he befriended. This kid was passionate about one thing, and that was music. His main area of interest was making hip-hop beats, and he began to show Titus the ropes of beat making. One day Titus decided to try his hand at his first beat. Already a writer of poetry in his spare time, Titus decided to put some of his writings with his musical compositions and found with much delight that he was not able to just compose music, but he was able to create lyrical masterpieces. That buried treasure box of creativity had finally opened and Titus finally knew what others had known all along, he was destined for a life filled with music.

From there Titus has continued to embrace music and excel to exceptional levels. He has perfected his lyrical craft through poetry and has been a finalist in several national poetry contests including one where his poem was nationally published in a book. He has also done artist development including physical training, vocal development, and media training with Darnell Clark and several other industry professionals. He has traveled through out the U.S. producing, singing, writing, and studying his craft. He has opened up for bands such as legendary funk band “Slave” most popularly known for their early 80’s singles “Just a touch of love” and “Watching You”, as well as the “Rick James Stone City Band” most popularly known for Rick James’ “Super Freak”. He has performed at the Nike Lebron James “More Then a Game” concert tour. He has also recently performed in concert with Atlanta’s hot new artists “Travis Porter” and “OMG Girls”. His eclectic taste for music is what he credits to be the reason his music is so creative and diverse. He has been told by several musical professionals that he is “the sound of the future, refreshing, and remarkably versatile.”

As a producer, he has been in the studio with well known production team “The Corna Boyz” in Atlanta, to Chicago where he has been scouted by the production team of Grammy award winning producer “Traxter” most recently known for Twista’s “Wetter” and Ludacris’s “My Chick Bad”. He has also done demo work for 2002 Grammy award winning producer Tiger “Da Beat Banga” Roberts out of Chicago who is most recently known for production on the Marques Houston “Naked” album. In recent months Titus has been doing collaboration writing with the production team “Beastaz” out of St. Louis Missouri most known for Rap artist Jibbs “Chain Hang Low.” Titus has also produced for up and coming young teen sensation rapper “Shotty Mayes” out of Columbus, Ohio, along with several other aspiring Hip-Hop, R&B, and Pop artist through out the Midwest and the South. Titus has also recently won the 2010 National KFC Hit maker contest judged by a panel of KFC marketing executives, fans, and celebrity judge Jazze Pha. Currently Titus is assembling a compilation of musical work for showcase. This compilation is a futuristic highly anticipated sound that will show his versatility to be able to create masterpieces amongst several genres of music including Pop, R&B, Hip-Hop, Go-Go/ House, and several others.