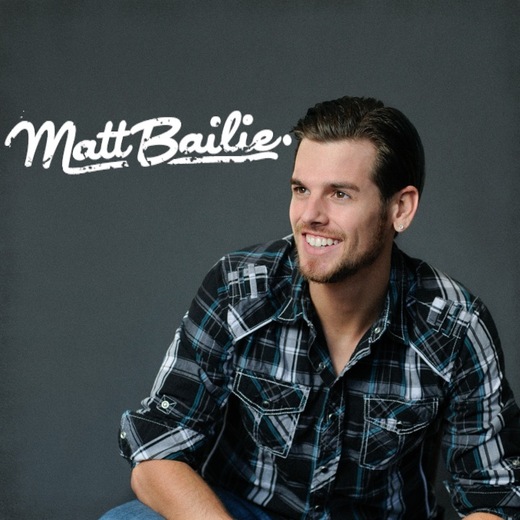 Matt Bailie makes me think of Garth Brooks when he performs!” Said by a judge at one of Matt Bailie’s early singing competitions. It all started when Matt was just a young boy watching Garth Brooks perform on TV. Mesmerized by what he saw, he began mimicking the performance and the dream began.

Matt Bailie is resolute in his desire to rise to the superstar constellations. Nothing will stop the momentum he is foretelling. Matt has found out-pouring support for his sophomore project from an army of Facebook Fans and an active street team, dubbed the “Bailie Nation”... all out in mass with their support.

The Florida born Matt has devoted his life to this moment. “I could never see myself doing anything but performing,” Matt said. “It’s in my DNA.” Matt Bailie’s father David Bailie, also a musician, never lived to see his son’s success. David passed away in a plane crash when Matt was only a baby. Fate intervened supplying the young Matt Bailie with notable mentors in the form of the Van Zant brothers, Donnie and Johnny, who happened to be friends of Matt’s grandmother. From a young age of five, the brothers included him in the “behind-the-scenes” experience of their shows. As Matt Bailie aged, the brothers related to his passion for a life of music and took him under their wing, offering the early guidance Matt needed as a solid base for his career.

Around this time Matt Bailie’s mom, Catherine Shearer, remarried to his stepfather, Richard Langlois, a local radio personality. Yet again, Matt was exposed to another aspect of the music industry. Richard, the only man he ever knew as “Dad,” introduced him to golf, football, and radio. Matt grew up living the “All-American Boy” lifestyle as a long-time football player, musician, and eventually falling in love with his high school sweetheart, later to become his wife. Sophomore year refocused Matt Bailie on his music when replaced as quarterback by Tim Tebow on the High School football team. Fate? The proof is in the story.

While the Van Zant brothers and Bailie’s family influence helped him lay the foundation for his music career at a young age, Matt became known at karaoke bars around Jacksonville at age 15 for his show-stopping performances. Thanks to Matt’s mom, Catherine, the bar owners agreed to let him perform in numerous competitions, which gave Bailie an outlet for practicing and perfecting his performance. If only the other competitors knew he had been practicing since he was first gifted a karaoke machine at age six, maybe they would have been prepared for his consecutive winnings.

He really developed his live stage skills however, opening for his mentors, the Van Zants – not an easy crowd for a teenaged-talent to cut his teeth on.  Matt entered and won numerous contests, all contributing even more fuel into his desire for success. Matt didn’t stop there, his passion and knowledge of music goes beyond the stage. He studied Performing Art, with a focus on voice and acting at Foundation Academy in Jacksonville, Florida. Matt Bailie’s studies opened the door of opportunity that completely entranced him. At age 18 the Van Zants recommended that he take the deciding step, and move to the heart of make it or break it competition, Nashville, Tennessee. Many a hopeful entertainers enter those city limits with their eyes sparking with stardom only to cloud over with tears of failure within the first year. Bailie is made of something much stronger.

It wasn’t long after transplanting to Nashville that Bailie developed a business relationship with John Briggs, then VP of Artist Development at The American Society of Composers, Authors and Publishers (ASCAP). Briggs opened many doors for Matt, encouraging him to co-write with established writers, honing his skills as he observed the masters of the craft.  He attended Nashville’s SAE Institute of Technology where he studied sound audio engineering, partially credited to the earlier introduction to audio engineering by his stepfather. It has always been important to Matt to have a strong education of all aspects of his career. In this study he developed skills in the technical side of the recording business that have contributed to his current success.

Just as Matt Bailie’s career was evolving, high school sweetheart, Alicia Lamoureux (now Bailie), joined him in Nashville to begin their American dream, fairytale life together. The two were married at a young age and working hard to establish themselves within the music industry, but that didn’t stop Matt Bailie from his dedication to raising two little ones and being the dad his biological father wasn’t given the chance to be.

Shortly after his marriage, in 2009 Bailie signed with EMC Management, under the guidance of Diana Henderson. Matt recorded and independently released his debut CD with high acclaim, self-titled project, Matt Bailie Critics swooned over Bailie’s talent. In journalist, John Shelton Ivany’s column, "Top 21" named Matt Bailie’s self-titled CD project, "Album of the Week" saying of Bailie's CD: He is able to capture character and play it out in song. This is just the beginning for Matt Bailie. His charming persona is going to get him a lot of fans, and he's keeping with a reliably tasteful style of country music in the background - just a touch of the blues goes a long way. A review in Country

Entertainment USA gave Matt Bailie “5” out of “5” Stars stating: This project is country to the core and reminiscent of an early Garth Brooks. I am looking forward to watching Matt Bailie’s career grow!

Fans liked what they heard, but craved more. Matt Bailie tapped into his acting skills, filming videos for singles, Man Behind These Eyes and Everyday You.  In our visual world, Matt’s good looks and charm immediately grabbed the attention of the television and internet audiences. In November of 2011, he spread his online fame by competing and winning in the OurStage Panel, an online search for the best in independent music, inclusive of all genres. Matt Bailie’s performance filmed before a sold out crowd at the trendy New York City Tribeca neighborhood’s Canal Room, had the media filled New York crowd on their feet clamoring for more of this new country superstar in the making. With a unanimous decision, Bailie walked away with the top prize, receiving the honor of winning the inaugural Finale of the OurStage competition, an indication that for Matt Bailie, the sky is the limit.

The sky maybe the limit, but Matt kept his feet securely on the ground. 2012 found Matt Bailie devoting his time between live shows, writing day in and day out, and preparing for his next project.  Utilizing his full tool bag of diverse skills and talent, which led to Bailie signing with Coastal Talent  in 2013 to expand his acting career.

To capture Matt Bailie’s unique voice – one that is instantly recognizable, Henderson brought in longtime friend, CMA and ACM Award-winning producer, Darran Smith, to lend his talents to Matt Bailie’s sophomore project, I Wanna Live Like That.  Grammy Award winner, Julian King, engineered the project with Jonathan Russell handling the mastering.   A proficient writer, Bailie wrote and co-wrote five songs on the new project. Under Your Spell a Bailie penned hit spins a haunting melody sparkled with mysterious lyrics that pull the listener into the conundrum of complicated relationships. What Good Is Being Right a song Bailie co-wrote with notable Nashville writer, Brian White, speaks of the wisdom of thinking before you take action...a song not in the country twang tradition of divorce being the ultimate answer.  Dress Down, a song penned by recording artist, Justin Moore, Ronnie Rogers and Jeremy Stover will launch the new project. An electrifying video filmed by Vintage Flicks and Amanda Young, Documanda Productions , will once again bring Matt’s charm into the visual realm offering a new elevation to Matt Bailie talents.  Dress Down is available for download on iTunes and various other internet outlets. The full project is set for release early in 2014.

We invite you to join the experience. Dive into singer and songwriter, Matt Bailie’s talented collection. Be a part of the story, a part of the Bailie Nation!