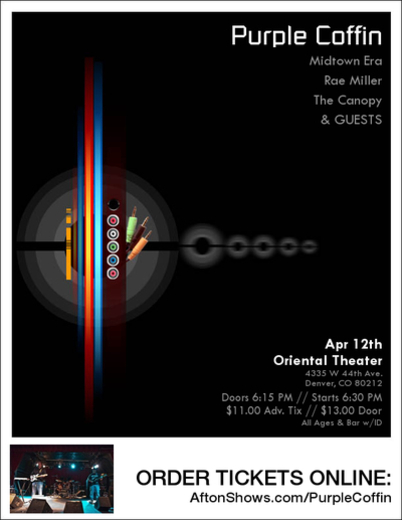 Purple Coffin (originally named Of Origins Unknown) began making music in the quiet suburbs of Castle Rock, CO.  The band was originally founded by Matt Gordon, Nathan Knowles, and Ian Salmi; and soon after the bands inception came Aaron Shaffer, the current guitar player of Purple Coffin.  While in the midst of writing their first batch of songs, guitar player Ian Salmi and drummer Nathan Knowles left the band to pursue other interests. Matt Gordon and Aaron Shaffer found Deric Romero (current drummer of Purple Coffin) and began writing their own songs.  PC is a diverse and unique type of rock band with styles ranging from metal to soft rock.  Diversity coupled with the ability to adapt musically has been key in creating a never before heard sound.

Late 2011 Purple Coffin publicly released their first EP, Dreams in Black and White.  PC is currently working hard to record and release their second EP later this year.  Purple Coffin has entered Ernie Ball’s Battle of the Bands in hopes to prove themselves and earn a spot on the 2012 Warped Tour Bill; this being their second year entering.  PC is also planning on playing other local shows and battles such as KBPI Best Band in Denver Competition.