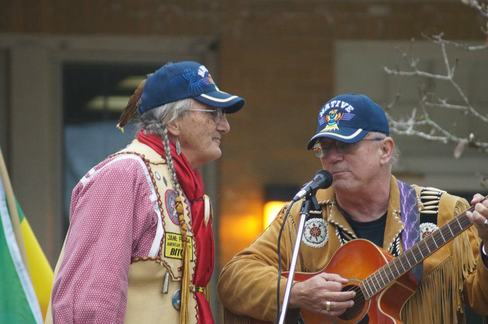 We wish to thank all of you for the support you have given us here on OurStage. It was your voting that won us the achievements you see listed here. We thank you greatly for this. Wado Equa! The music of SilverWolf (adelaunegvwaya) is described by their audiences as "taking a chill pill". Their two CD releases, Tali and Kamama, have been well received and distributed worldwide. Members of the group also do some independent solo work. The group includes

The group formed in 2003 with Frank Silverhawk and Mike Whitewolf performing at various cultural events, concerts and powwows in the general central Florida area. Nic Lonewolf added his efforts to the group starting in 2006. Nic also has some of his solo work on OurStage. Look for his works, "Sail", "Alive" and "Coming Soon" on the Electronic and New Age/World channels

Memebers of the group have also worked with other artists, some of whom are right here on OurStage.  In addition to his work as a member of SilverWolf, Mike WhiteWolf is also the chief engineer and producer for Serios Sound Productions.  It was his work that resulted in the releases you will find here on OurStage for the following artists: Sybille Hummingbird, Cody Blackbird and John Two Flutes Fields.  The two CDs he produced for Cody Blackbird resulted in two official nominations and one award for Flutist of the Year from NAMA (Native American Music Awards) or, as it is called in the industry, a NAMMY