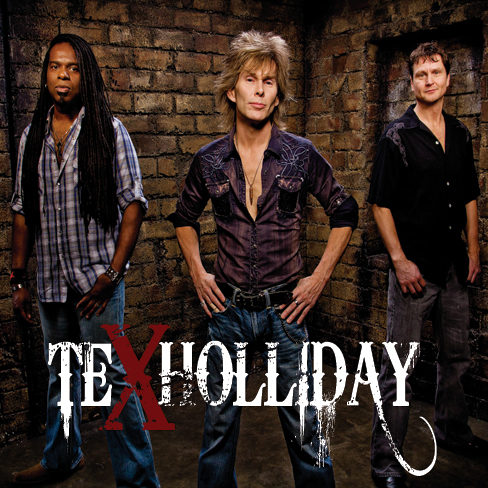 Beyond the obvious look of the band, Tex Holliday is not your typical country band.

Formed in 2010 in Vancouver, BC Canada; Tex Holliday are no strangers to the music business. While on tour with recording acts “The Distance” and “Heartland” across Europe, singer/guitar player Kenny was busy co-writing with other artists. Many of these songs were released on Sony, Electra, Warner and a host of Indie labels. Dave has toured all across Canada with many bands throughout his musical career, honing his skills as the bassist and singer for “Joe's Garage”, the house band at the world famous Roxy Cabaret in Vancouver BC. As a drummer, songwriter & drum consultant, Chiko has worked with many top selling artists including Vancouver's “Bif Naked” and international recording artist “Avril Lavigne”.

In May 2011, Tex Holliday released their first single "Wrong Side of Heaven" to Canadian radio. The single received widespread attention and is currently being played on more than 160 radio stations across the nation.

As of March 1, 2012; Tex Holliday's self title debut album is available on iTunes, and includes the singles "Wrong Side of Heaven", fan favorite "Always", sing along anthem "8 Coronas" and a country kickin' version of Billy Idol's "Rebel Yell".

Kenny, Dave and Chiko can also be heard as the studio musicians on many new country artists releases. One of these songs co-written by Kenny was featured on TV series “Dussault Inc.” in 2012.

Tex Holliday is NOT your typical country band! High Octane, Super-Charged country rock anthems... country for the rest of us!