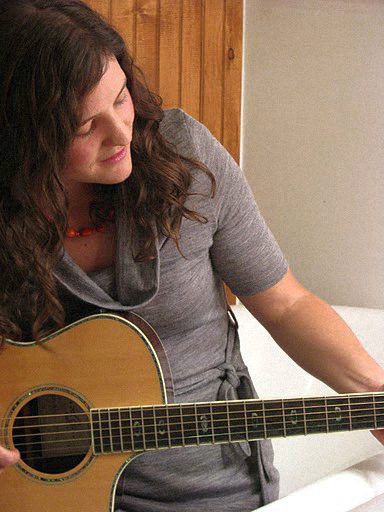 There’s something reassuring about Andrea Lynn’s strong, hopeful vocal and steady, guitar driven instrumentation. Her music is strong without being aggressive, emphatic without being loud, emotional without being weepy

Andrea’s songwriting style has been predominantly influenced by American folk, rock, and bluegrass music, reflected in her strumming patterns and melodies. Her lyrics are both fun and insightful, painting honest pictures of “life and love and everything else.

Andrea cites her musical influences as ranging from Van Morrison, Nickel Creek and The Indigo Girls, to name a few. Her music has a similar sound to Ingrid Michaelson, Colbie Caillat, and Sara Bareilles

In the spring of 2005, Andrea moved to the island of Martha’s Vineyard to focus on her music at an invitation-only artists’ colony for musicians and entertainment industry executives. Here, Andrea spent time writing and recording her debut album, “Butterfly Wings,” released by 450 Records in April 2005

Andrea’s sophomore album, “Run To Me,” released in December 2006, stripped down to strings and vocals while infused with the talent of Blue Murphy on the acoustic upright bass, offers a raw taste of this young artist’s budding style. Two songs from this CD were featured in the PBS documentary "Switchback: Trigger Your Senses." Switchback is being utilized as an avalanche safety video by a number of organizations including Colorado State University, Prescott College, and Summit County, CO Fire Department and Sheriff's Office. It aired on Rocky Mountain PBS on February 2, 2011 and has screened in multiple theaters across Colorado

Andrea’s third, and most recent album, “The Mountains and The Sea,” released in December 2010, is one of her most musically interesting, collaborative and multi-layered albums yet. From the four-part harmonies (w/ Sondra Eisenstat of Teacup Gorilla, Bonnie Gregory of The Horse Latitudes, and Jennifer Thompson) in “Missing You” that give a depth and richness to the vocals, to Rachel Zylstra’s enchanting piano melody line in “Like You Do,” to Chuck Morris’ (of Lotus) percussive touches on “Color Outside the Lines” and “Ride Home”: these parts all add to the story she is telling, fleshing it out, bringing out elements that are only implied or partially stated in the lyrics

"...it is the powerful but gentle tone of Lynn's voice that captures most of the attention, as elements of influences like Indigo Girls can be clearly heard."
-Denver Westwor

All of Andrea’s CDs can be found on iTunes, CDBaby, and her website's Store page.