Ballerina Black is a Los Angeles band who has best, if yet cryptically, been described as: 'Energetic mope rock' & 'pop-y post-punk-grunge,' by most critics and fans alike.
At the band's inception, Bobby, a veteran of LA's rock scene and the band's frontman, was inspired by ballerinas. Specifically his admiration was drawn from the discipline and endurance it takes to create suc

h beauty. Mimicking such dedication, the band began a journey into creating its deep, brooding, visceral sound that now draws welcome comparisons to some of the band's greatest influences, including Nirvana, The Cure, Radiohead, and Joy Division. Ballerina Black was born. . .

With Esli Sugich (bassist), Anthony Anthos (drummer), and Scott Eton (keyboardist & additional guitars) completing the band, BB made an instant impression, landing its singles on some of LA's most influential radio stations, as well as being premiered on Gossip Girl's season premier promo and MTV, among many others. Quickly they were booked at the best venues in Los Angeles, the highlight which was landing on stage at the Greek Theater opening for one of their longtime favorites, Interpol.

Ballerina Black's debut album, Cattle Arithmetic, a 'record that bleeds with energetic despair, pierced with shards of hope; in short, a hypnotic temper tantrum' is spreading rapidly after its mid 2011 release. The record has attracted a distribution deal with Universal's JMD records and the attention of several music publishers. 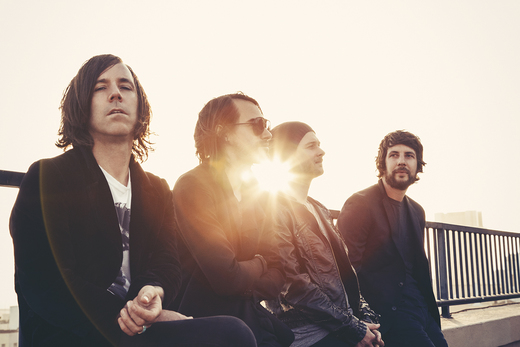