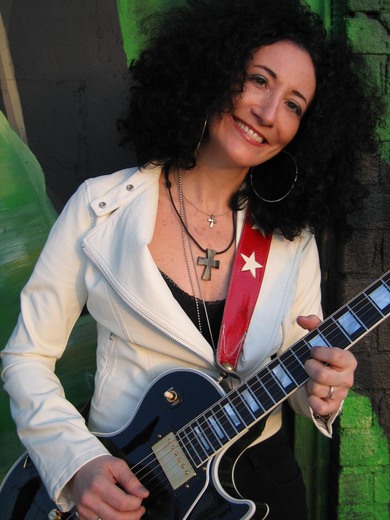 ​Cecilia Villar Eljuri, an extremely gifted guitar player, composer, singer and multi-instrumentalist, was born in Guayaquil, Ecuador and raised in the cultural melting-pot of New York City. Through her performance, Eljuri shares her life experience and inspires us. Her compositions motivate us to stand-up and make a positive change in this world.

“Fuerte,” her sophomore solo album is the culmination of Eljuri’s journey to self expression. With a consistent and persistent musical attitude she initiates a conversation which leads to action. Eljuri’s music is a mirror on this generation’s global fusion which reflects her Spanish and Lebanese heritage, the rhythms of her homeland, Ecuador, and the punk and rock & roll from the melting pot of her youth in New York City. Eljuri filters the daily cacaphony of the streets into beautiful music with vital meaning. She floats, indeed soars to heights unreached by any other Latina guitarist. She counts Jimi Hendrix, Bonnie Raitt, Bob Marley and Carlos Santana as her role models. LIVE audiences, critics and radio DJs agree that “Fuerte” is a powerful album. Eljuri’s melodies, message and mastery of guitar are electrifying.

Daughter of Ecuadorian Paco Villar, the revered pioneer of radio, television and theater and Olga Eljuri a composer of great renown in Ecuador, Cecilia’s career was nurtured from an early age. She was immersed in music and the arts. As a songrwriter and performing professionally when she was 17 with The Trouble Dolls, she filled historic New York rock clubs like CBGB's and The Bitter End. Drawing from her latin roots, her music, lyrics and arrangements began to resonate with that style when she formed the band, Grupo Fiesta (1998).