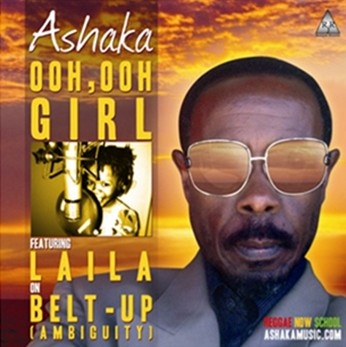 Linval Thomas spent 22 years in the United States Air Force. After leaving the military fourteen years ago, the Kingston, Jamaica native has been busy trying to earn his wings as singer. Thomas, better known by his moniker Ashaka, recently completed a six-song EP featuring the title track, ‘Ooh, Ooh Girl’, which is a tribute to lovers rock, the reggae spin-off perfected by singers like Alton Ellis, Dennis Brown, Gregory Isaacs and Freddie McGregor. ‘Save Darfur’, a poignant song looking at the suffering in sub-Sahara Africa, is also included on ‘Ooh, Ooh Girl’. The set is completed by ‘Belt-Up’, a pop number that examines the controversial dress code of the hip-hop generation. The remaining cuts on the EP are the rhythm tracks of the aforementioned songs. Ashaka, who lives in Belleville, Illinois, says his music is geared to reach the ears of indiscriminate music lovers. He points out that to date ‘Save Darfur’ and ‘Ooh, Ooh Girl’ have made some impact on regional radio in Missouri, which influenced him to put together the EP. “It has attracted attention from as far away as the United Kingdom, resulting in a European-wide distribution deal with Stringbean International Records,” Ashaka said. Based in London, Stringbean International Records is a leading distributor of dancehall and reggae in Britain. Five years after leaving the US Air Force as a senior master sergeant, Thomas, as Ashaka, went back to his first love: making music. His debut effort was ‘Unite’, a roots-reggae message song that made little headway but announced the singer’s return to the music scene which left behind in 1972 when he immigrated to the US. Ashaka was born in Fletchers Land, a tough area in west Kingston. That area has produced some of the biggest names in Jamaican music, including pioneer producer/singer Cecil ‘Prince Buster’ Campbell; ska singer Patsy Todd of Derrick and Patsy and Stranger and Patsy fame; as well as Gregory Isaacs, one of the biggest exponents of lovers rock reggae. Ashaka says his first recording, ‘Bachelor Boy’, was actually done for Buster when he was 13 years old. He never maintained his recording career in Jamaica as he left for the US in the early 1970s. Even while he was in the service, Ashaka says the music of his heroes was never far away. He tuned into the sounds of Bob Marley, Bunny Wailer, Albert Griffiths of the Gladiators, Bunny Rugs of Third World, Horace Andy, Marcia Griffiths and the ‘Cool Ruler’ himself … Gregory Isaacs. Ashaka has no doubt that his own music will break down barriers and reach indiscriminate ears. His debut album, ‘Time’, will be released in December.