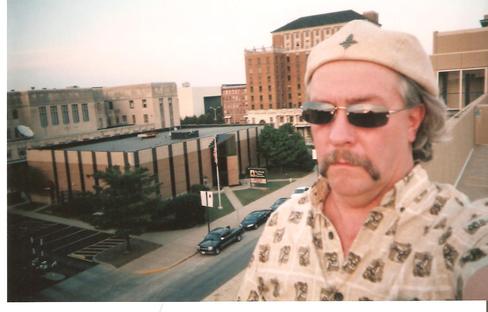 Hi, I'm SeeDubYa, which is just a phonetic expression of my initials. CW. Currently, I'm the keyboardist and one of the vocalists for a band called Fat Freddy's Cat, (links below,) that works mainly as a studio group in the west-central Indiana, east-central Illinois area. Prior to this gig, I was involved in a group called SHB. (the Steve Harris Band q.v.)I actually started playing in my first rock band in 1971, but never really got serious about it until several years thereafter. Started out as a lead singer/front man. Discovered singers were a dime a dozen. Knew how to play a little bit of keys and gradually worked that into various bands. Always wanted to play my original stuff, but the local market in this area wasn't conducive to making any real headway at it. Kept composing tunes anyway. Recently, I decided to post some of the pieces that had never been released or worked up as a group/band project. This page is going to be mostly dedicated to those songs
For the record, yeah, I'm one of those "old hippies" that is still out here doing "my thing". I try to be as green as possible. Do no harm, unless you have no other recourse. Be positive, even in the face of darkness. Been there. It's not always easy. The world's an angry place these days. If you like any of the tunes I post here, Thanks!!! Got some links below to the band I currently jam with and other work of ours that's available on the net. At a later date, I plan to post a listing of all the local bands I ever worked in, even though all of you outside this area will have never heard of any of them. That's the price of performing in a small retro market. Sometimes, I find it funny to see that the same names have been used repeatedly all over the world. Ah, but entertainment can be like that. Peace!