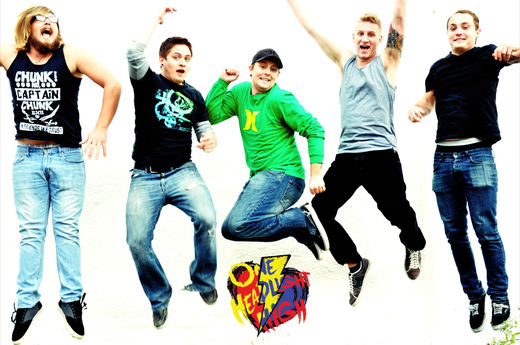 From the small town of Tarkio, Missouri comes the pop/punk rock band One Headlight High. The band consists of five members who are all in their early twenties; Danny Hogue: guitar, Ethan Piveral: bass, Duston Noland: drums, Trevor Phillips: guitar, and Tyler McIntosh: vocalist. One Headlight High started in February 2010; the original members are Ethan, Duston, and Tyler. Danny joined the band a few months ago and Trevor has been with them for about a year and a half. All of the members started playing music at a very young age. Duston got his first drum set as a gift at the age of nine. Trevor started playing the violin as a boy and then taught himself to play guitar. “I can read sheet music for the guitar so I self taught myself to play,” says Trevor. One Headlight High is pop/punk rock with a little bit of modern groove and very catchy lyrics. Their music is written in collaboration from all of the members of the band.

The band has recorded two albums so far. The first titled "One Last Chance" was recorded and released in 2011. Their new 10 track sophomore album titled "Live Free or Don't" (one of many Futurama references in the record) was recorded in March of 2013 and is set to release on iTunes September 13th. "We are beyond excited for the release and possibilities of this new album" says the guys. "It turned out one million times better than we all ever imagined." They are recently travelling around Missouri, Nebraska, Iowa, and Kansas in support to their newly released record.
« View This Artist's Complete Profile
Connect with OurStage: Facebook Twitter YouTube FourSquare Newsletter RSS feed
ADVERTISEMENT
?Need help?
Copyright © Amazing Media Group  2006-2022
p
A
n
E
F
Song Title by Artist Name
987654d
LM
iAnEAqqqq