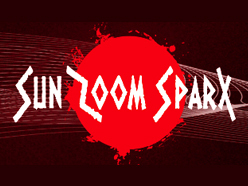 Formerly CoelacanthDance, which was the name of the one person project composed, played - on guitar, bass, keyboards and drum programming, and recorded by Steve McDonnell at his home studio 'Crying Fish Studios', and released as an independent CD titled: 'Sonic Excursions and Audio Spasms' in 2007. Available via CD Baby, iTunes, Amazon.com, napster.

Shortly after the release of that CD the full band version of CoelacanthDance was (spawned) and although the band plays - and expands - on the original compositions on the CD, the music has evolved and morphed into a potent mixture of rock, funk, jazz fusion and psychedelia, peppered with monster riffs, Krautrock grooves, mid-70s ambience and left field curveballs.

In July of 2011, due to ongoing pronunciation (and marketing!) issues with the original name the decision was made to re-brand as: 'Sun Zoom Sparx'

The name may have changed, but the song remains the same!