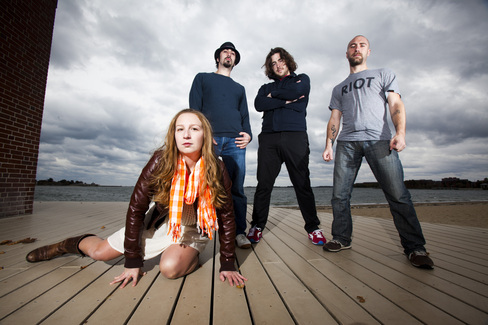 At seventeen, Leesa Coyne moved out of her parents’ house and made her way to Boston, where she honed her songwriting craft on the roof of her brownstone with a single acoustic guitar. Travis Richter met Leesa through the local music scene and immediately realized that her powerhouse melodies had outgrown their humble singer/songwriter beginnings; Naked on Roller Skates was born.

Naked on Roller Skates is comprised of Leesa Coyne (vocals, guitar), Kevin Harvey (bass), Travis Richter (guitar) and Aaron Zak (drums). Lead singer Leesa Coyne’s unmistakable voice rings out with power and soul, and her beautiful melodies, coupled with her proud and angst-filled lyrics, linger in your brain for days on end. Recent transplant Kevin Harvey, formerly of the Nashville-based rock outfit Newmatic, is handling bass duties. Travis Richter, fueled by his love for melodic riffs and solos, showcases his talents as lead guitarist. Aaron Zak brings his high-energy drumming style to the fray, and has most recently been performing with Slant of Light prior to joining Naked on Roller Skates.

With infectious songs like “Sugar” (mixed by Anthony J. Resta) and “Badside,” NAKED ON ROLLER SKATES keeps on rolling after the amazing response to their freshman EP I Lost my Heart in the Battle. From playing The Harvard Square Mayfair festival to hundreds of fans, landing an opening slot for the band Wheat, and Leesa being nominated as Best Female Vocalist in the Boston Phoenix Best Music Poll, there are no signs of them slowing down. In support of their freshman EP, they continue to rock the faces off of fans at some of the North East’s premier venues, while also working on new material for their sophomore release.