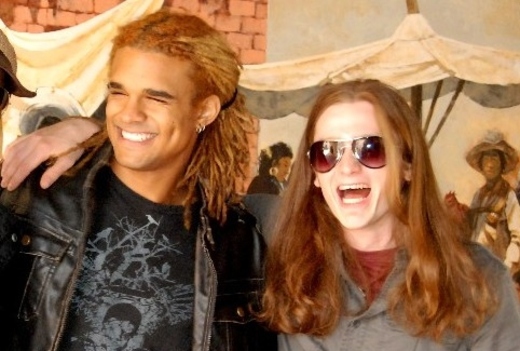 ~Official Website: www.grahamsnumbermusic.com ~Facebook: http://www.facebook.com/home.php#!/profile.php?id=100000532007548 ~www.reverbnation.com/grahamsnumber ~ join our fanlist, become a fan,check our music, videos, shows, more. ~MySpace: http://www.myspace.com/grahamsnumbermusic ~ Graham's Number Management Team: David and Bobbie Stanley, Lucy Piller ~ Publicist, Media, Booking: Lucy Piller - Email: Lucy@allrightnow.com ~ www.myspace.com/arnatlanta ~ Allrightnow.com ~Marketing & Merchandise: Damian Crissy We Are Graham's Number Our Music Sounds Like A Collage of colors on a dancing afternoon, balancing on a seam of density and chaos creating a warm feeling on your cerebrum in the right spot, bluntly and heartfelt everchanging and expanding, as all journeys pursue the next second of existance. SOuNdzZ oDdlLY dELicIOuS. Graham's Number is an upcoming Atlanta band of three with extraordinary potential and a cutting edge new sound. They combine traditional song writing with new innovative sounds, incorporating an array of styles into their music with influences ranging from Jimi Hendrix, and The Beatles, to The Red Hot Chili Peppers, and Sublime. Based in Marietta Georgia, Grahams Number got it's start in 2008 with guitarist, Nick Sanders, teaming up with best friend, bass guitarist Andy Scherm. In July of 2009 drummer/songwriter, Brandon McKinney, was added on to complete the line up. The chemistry these young men have together bring back recollections of greats such as the Beatles, Led Zeppelin, and Rush. Graham's Number performs a mystical journey of Rock, Funk, Soul and Reggae with beautiful harmonies which are all rolled together to form the band’s UNIQUE sound. ~ Nic Sanders - Guitar/Vocals; Andy Scherm - Bass/Vocals ~ Nick Sanders, born in Atlanta, GA on April 26, 1990, began his musical adventure at the age of 11. Impacted by personal, real, raw, magical, and down-right soulful music, his influences range from Jimi Hedrix, John Lennon, Bob Dylan, Bob Marley, Robert Plant, Kurt Kobain, Bruce Hampton, Sublime, Radiohead, Grateful Dead, Red Hot Chili Peppers, Primus, and Alice in Chains. At 15, Nic officially set his heart on playing music that made one think and feel a deep sense of awareness of one's soul and consciousness. A message of love, peace, and oneness of all mankind. He uses his heart and soul as his teacher to create music that is not bound by age, ethnicity, or culture. As a guitar and spiritual music prodigy at age 18, Graham's Number was born.  Andy Scherm, born in Atlanta, GA on September 20, 1989, Andy discovered his interest and love for music at the age of 11, and joined the orchestra playing the stand up bass. Three years later, Andy was introduced to the bass guitar. Some of his influences are Jimi Hendrix, Victor Wooten, Grateful Dead, Radiohead, Primus, Nirvana, Flea, and Vanilla Ice. A spiritual message inspired Andy's input into this transfusion of soulful, raw, in-your-face music. He gets carried away by just picking up an instrument and playing. To Andy, music is very real and personal.

Like many of the arena bands of the 70s and early 80s, Graham's Number brings a raw but captivating live performance aimed directly at the very soul of every member in their audience. Their music is young, fresh, fun and yet provides great depth and melody. In this day and age, if ever there was a band that could establish a new revolution in music, then Grahams Number is it. See them live only once and you will want to see them again and again.

From the very first note you get the sense that you are about to take an exciting new journey, one you've never experienced before, and you sense that nothing will ever be the same again.