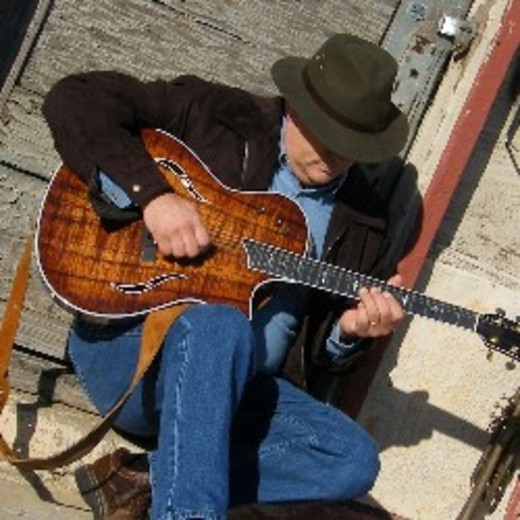 Comments from Around the Music Industry:

"Wow! Very professionally made video and the sound rocks!!"

Raised in Pine Bluff, Arkansas (home to blues legends Big Bill Broonzy and Cedell Davis), Dave Sadler began playing guitar at the age of twelve. Coming from a musical household, that includes a distant relationship to Johnny Cash, a grandfather who was an amateur minstrel singer, and a mother who was a piano teacher - it is no small surprise that Dave continued the musical journey.

Growing up on the edge of the Delta, blues inspired music surrounded Sadler. Where a typical kid might have been found listening to the latest top 40 rock hit, Dave, a self-taught musician who plays by ear, would often be found locked away in his room listening to the likes of B.B. King and Elmore James, trying to emulate their playing styles

Also heavily influenced by modern players such as Eric Clapton, Robert Cray, Stevie Ray Vaughn and others, Dave's playing style is a blend of blues, rock, jazz and funk, utilizing both electric and acoustic guitars

"I have always had a passion for blues, blues/rock and jazz. These genres seem to influence most everything I play, compose and record", Dave says.

Dave Sadler is affiliated with BMI as a songwriter/composer publishing and recording for the independent label, BluezArt Records.

"With a broad range of bluesrock, jazzy ballads, reggae and funk, this album sought blues inspiration from many places. Arkansas/Mississippi, Louisiana/Texas and Chicago-influences merge into a homogeneous whole, in which Dave Sadler, guitar man from Arkansas, feels at home like a fish in the water."
- Mieke Geukens , Rootstime (Jun 21, 2008)

"Sadler also includes a slew of instrumental numbers on the album which showcase his mastery of the guitar. As well, he gets by with a little help from his friends such as prominent saxophonist, Dan Cipriano, whose playful exchanges on "Can’t Take It With You"..an instant listener’s delight"
- Skott Freedman, Indie-Music.com (Apr 05, 2008)

"On Fade to Blue, Arkansas blues singer Dave Sadler offers up an eclectic mix of 16 guitar driven songs based in the blues/rock tradition of the Midwest. He's an accomplished multi-instrumentalist and clearly knows what he’s doing on the guitar...musicianship to stand apart from the crowd..."
- Skott Freedman, Indie-Music.com (Apr 05, 2008)

The Making of "Fourth Street Ruckus":

The idea for the title track "Fourth Street Ruckus" originated from a cut released in 2008 entitled "Ain't Got Time". Dave decided that the vocals should be replaced with some rip-snorting blues harp. He turned to Roly Platt, a veteran of the diatonic harmonica, located in Barrie, Ontario. Platt recorded the harp track at his personal studio creating a warm, slightly over-driven sound that hit the mark.

The five piece horn track was like-wise recorded by Dan Cipriano at his personal studio in New York City. Cipriano layered alto sax, tenor sax, baritone sax, trumpet and trombone with the perfect precision he is noted for.  The mix was ultimately created at Sadler's studio in Arkansas were he added guitars and bass along with the percussion of Jesse Rocha, a long-time friend of Sadler.

For mastering, Dave turned to Christian Wright at Abbey Road Studio in London.  Additional production assistance was provided by Ian Shepherd of Cambridge, UK. The end result was an instrumentally tight track with a surprisingly live feel.