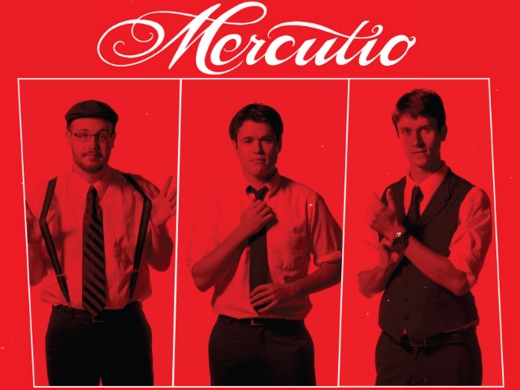 Mercutio began in 2009 when two friends from Lynchburg, Michael Chagnon and Geoffrey Osborne, took to the road for a week long tour of Florida with the new acoustic act they had put together over their final months in college. By 2010 Michael and Geoffrey had established a steady base of support around Virginia, quit their jobs and moved into a house which they converted into a recording studio and business office. From this base of operations the duo, now called Mercutio, recorded their eponymous debut EP (released late in 2011) and in 2012 drummer Ken Brand joined the group for the sessions that would become “Self Titled,” the band’s first full-length record, released in February 2013. Ken called on former bandmate Charlie Boyd to play bass on tour in support of the new record and after a dizzying four weeks on the road Mercutio’s line up was solidified. Mercutio has appeared on ABC, PBS, independent radio across Virginia and North Carolina, and on stages in New York, Boston, Philadelphia, Baltimore, DC, Richmond, and everywhere in between. Five hundred shows later the band still returns to Lynchburg to write, record, and perfect their craft in between weekly outings across the mid-Atlantic.