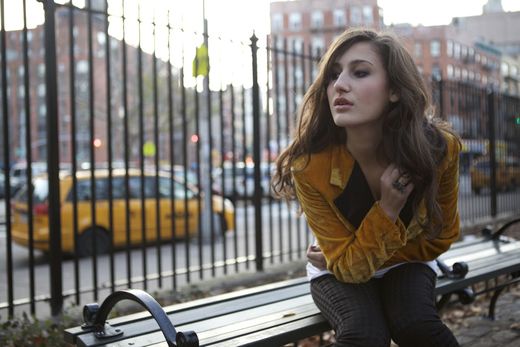 Sometimes, all you need is an acoustic guitar and a dream. Sarah Solovay's got both, and she happens to have a rather transcendent voice to boot. This 19 year old New York City singer- songwriter strikes just the right note between organic catchy rock and vibrant pop with each and every song that she pens. Cuts like the hypnotic "Hearts Collide" and powerful "Superhuman" weave together unforgettable melodies and heartfelt, honest lyrics. That's precisely why Sarah's music has already reached massive audiences via hit shows such as 90210 and why she was chosen by fans to open on a stop of John Mayer's "Battle Studies Tour." However, it's all merely preface to the moment Sarah truly arrives, when her forthcoming debut album drops and captivates the entire world. Even though she's been playing since she was six-years-old, Sarah's talents began to receive serious attention and industry affirmation in 2008. "Gone" won the 2008 New York Songwriters Circle "Young Songwriters Award" and won an Honorable Mention in The International Songwriters Competition. Sarah explains, "That was one of the first big things that happened to me. Winning that award was an incredible milestone." It's only the first of many milestones to come. Her sound exudes a true vibrancy because it's so personal and tangible. Sarah describes the alchemy at the heart of her sound. "My music is a mixture of upbeat pop rock and raw singer-songwriter. I begin all of my songs with an acoustic guitar, and they eventually evolve into these full productions. I want to toe the line between singer-songwriter and mainstream pop girl. There's a little bit of both in me." You can hear that on her 2009 iTunes release, Gone – EP, but it's even more evident in the strong and evocative "Superhuman" and "I Hate Him," Sarah's latest tracks to hit the Internet. In addition, Sarah's music serves as the soundtrack to both popular television and film productions. "Hearts Collide" played over a March 2010 episode of the smash hit show, 90210, with Sarah as 90210's featured artist. The track was also included on the highly successful soundtrack for the show, alongside songs from chart-topping sensations such as The All-American Rejects and N.E.R.D. Meanwhile, the pensive and poignant "Flaws and All" was written specifically for the MySpace TV show BFF, and then found its way into The Hole by acclaimed genre director Joe Dante (Gremlins, Gremlins 2: The New Batch). Sarah explains, "The producers came to me and asked if I would write something about best friends for BFF, so I came up with 'Flaws and All.' MySpace TV used it, and then Joe Dante decided to feature it in The Hole as well." Sarah has also been showcased on Teen.com and TeenVogue.com, but she truly shines on stage. "There's something really perfect about the connection between the audience and the performer," she says. "You can do anything you want on stage with the songs." Sarah continues to dazzle audiences all over her native New York with more touring to come. Ultimately, Sarah's just being honest with her music. "For me, it's all about being able to express myself. I never stop writing." She continues, "When people listen to my songs, I want them to know that someone else has gone through what they're going through. Music connects people, and it lets us know we're not alone."