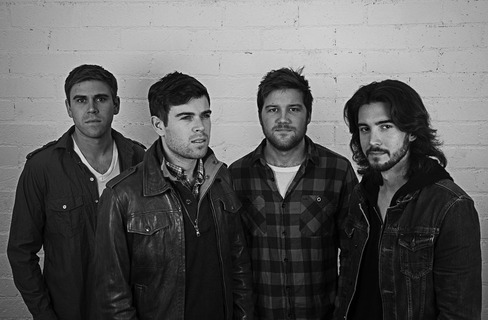 The Gallery’s hook-laden rock songs combine a mix of mainstream appeal and professionalism with indie cred and likeability. Their brand of guitar-driven, southern-infused pop rock blurs the lines between authenticity and commerciality, producing songs that are refined and disarmingly catchy. A subtly biting guitar sound, road-worn lyricism and consistently sharp musicianship transform their tracks into instantly memorable pop gems you don’t want out of your head.

The Los Angeles foursome have turned a lot of heads in the past few years, and the strength of their musicianship and songwriting are two big reasons they've been able to grow so quickly. The Gallery started out in Massachusetts, where they maintain a strong fanbase. They built a similarly strong following during their three years in Florida before moving on to LA, the current home base for Brendan Cooney (lead vocals/guitar), Dave Mozdzanowski (bass/vocals), Ben Lozano (guitar), and Ryan Cooney (drums). More often than not for The Gallery, however, the road is called home. The excitement generated and attention garnered during their musical treks through the states has proven that the passion and talent of the group has more than just regional appeal.

Their new album, Restless – produced by Warren Huart (Aerosmith, Augustana, The Fray), is already drawing attention. AbsolutePunk.net dubbed title track Young & Restless “a jangly should-be chart-topper that screams platinum from the opening seconds” and the disc as a whole “a triumph and a startling step forward from a band that won't be under the radar for long.” Similarly, Alternative Addiction stated “for an album that’s been truly released independently from a band that’s never really been on a label, these are the best songs I’ve heard in a long time.”

This isn’t the first time the band has been recognized for its songwriting. The group’s 2011 EP, Come Alive, earned them attention from such nationally recognized publications as Rolling Stone, Alternative Press and AOL Spinner. Nation-wide college radio airplay landed them on the CMJ charts, and the International Songwriting Competition selected them as finalists twice, in Rock and Triple A categories.

The Gallery thrive on their guitar sound—a blistering, Americana-infused blast apparent in rockers “The Runaround” and “Fast Friends”—and they solidify their commercial-ready credibility with sharp composition and lyricism that elevate stunning ballads like “Ballroom of Broken Hearts” and “Restless Soul.” The punchy riffs that drive songs like “White Noise Town” will ring familiar with those already in the know about the band. For newcomers, the new album Restless (released 2/26/13) is a place to start.

Some of the venues we've played, or will soon play, include: