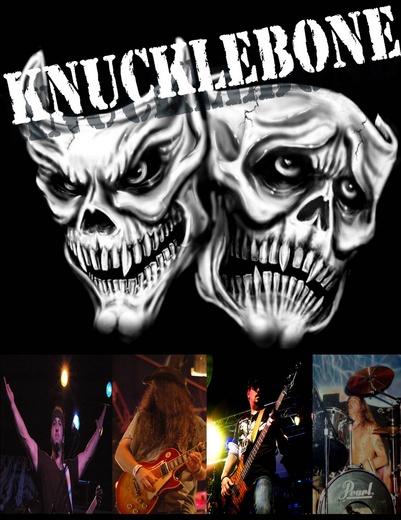 Knucklebone is an in your face driving rock and roll band. Their line-up consists of Ronnie Caporelli (Lead Vocals and Guitar), Moose (Guitar and backing vocals), Fred Perrotti (Bass and Backing vocals) and Matt Dell (Drums and backing vocals). Knucklebone was formed from a former band of high school buds, Jersey Gypsy. After playing many shows opening up for bands such as Great White, White Lion, Britney Fox and LA Guns to name a few,  Jersey Gypsy was looking to take it to the next level, so a second guitarist was added. With Moose’s input adding a new dimension to their sound, a new name and style was created, ''Knucklebone''. Now Knucklebone is touring and promoting the release of their CD ''Last Call For Alcohol'' in the NJ and PA scene in places such as The Starland Ballroom, Crocodile Rock Cafe and Mexicali Live. Some of their most recent shows include main support act for Cinderella, Michael Schenker, Lynch Mob, Bang Tango, Trixter and KIX. The members of Knucklebone are all NJ natives getting ready for their next show on November 5th with the legendary Sebastian Bach. Check out the website at WWW.KNUCKLEBONE.BIZ