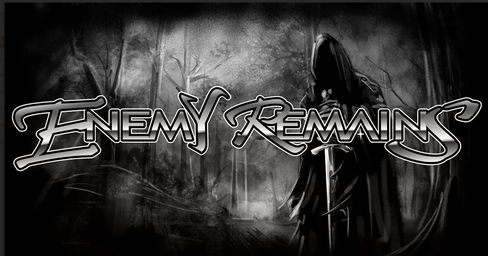 Originally formed in 2005 by original Fates Warning drummer, Steve Zimmerman, and guitarist extraordinaire, Tommy Blardo, Enemy Remains began as a project for two musicians looking for a new outlet and has since grown into a hard rock force of nature. With driving rhythms and a progressive edge, Enemy Remains quickly set themselves apart from the vast majority of hard rock/metal hybrids. Enemy quickly added vocalist Kevin Flowers to the mix and began the process of writing new material, which would eventually become their highly acclaimed, six-song, 2007 demo.

Their first studio offering would be followed by a string of successes which included sharing the stage with such rock luminaries as Alice Cooper, Queensryche, and Heaven and Hell – otherwise known as the Dio-fronted version of Black Sabbath – and having their song “Live For Today” featured in the Rock Band video game for XBOX 360.

2014 saw Enemy Remains rounded out their line-up with the addition of two new members in second adding a new mix to the music. This new and improved line-up would be the first local act to be invited to play the massive XL Center (20,000 capacity) in downtown Hartford, performing in an opening ceremony for the Hartford Wolf Pack, the New York Rangers’ AHL affiliate.

Enemy took a brief hiatus in 2015 for Steve Zimmerman to focus on reuniting with original Fates Warning, Zimmerman, fresh off a four album stint with one of the most influential prog-metal bands in existence – including being behind the kit for the Decibel Magazine Hall of Fame album, Awaken The Guardian – & for Tommy (The Beast) to focus the developing of his Digital Radio Station “Metal Fortress Radio” now a known station worldwide by both National and Regional bands around the globe.

With the addition of new vocalist, Frank Morin, Enemy Remains now has arguably their most stable and powerful line-up yet. Some bands take a long and winding path to their best successes and 2016 sees Connecticut’s Enemy Remains poised to reach for the top of the hard rock mountain with their newest EP set to release in Summer of 2016 with the highly anticipated single “No Faith In Humanity” ; Joey Conception- Guest Guitars
Edit