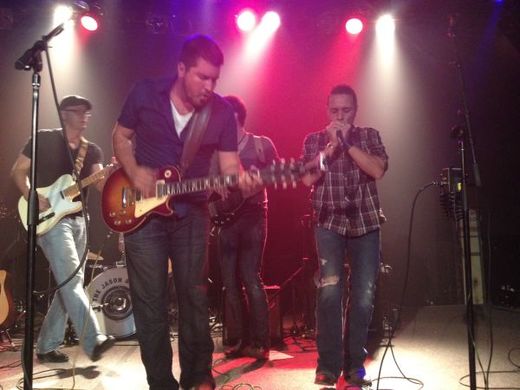 An interesting thing happens when a tight 6-piece band of respectively talented musicians ditches gimmicks and masks; honest, unpretentious, full-bodied music is born. The Jason Adamo Band started with the man himself, a truly soulful singer with inspired lyrics and raspy falsetto. Although a native of Raleigh, NC, Adamo is also recognized as a staple in the New York City underground music scene and is featured in writer Heather Jacks’ upcoming book and multimedia project on busking, The Noise Beneath The Apple. Jacks shines light on Adamo’s Joe Cocker-like “bold grit and heart,” and ability to take a captive audience from “engaged silence” to a “floor stomping, rollicking, good time.

The JAB recently(independently) released their EP Bricks & Mortar on June 5, 2012, following their 2010 full-length Transistor. Recorded at K House Recording Studio in Raleigh, NC, the EP was engineered by K House owner Mark McKee and Derek Olds, and produced by the band’s own John Briggs, who also produced Transistor.

In recent years, Jason Adamo has played shows all over the United States opening the show for many noted musicians-among them are:

As well as playing side stage for the following National Acts

"The power Adamo is able to maintain at the top end coupled with his raspy falsetto and knack for writing and passionately delivering his simple yet soulful lyrics make him an artist with the potential to be somewhere between Josh Kelley and Marc Broussard." - Marion McMillan (The Cultural Intellect

"It’s good to hear a kid that can sing. In the endlessly expanding myspace universe of post-yourself-playing-your-older-brother’s-guitar/hear-me-sing-like-Mariah-Carey, it is good when a young artist makes you loosen the grimace on your face and say, “Hey, there really are some people out there with authentic talent.” Thank you for that, Jason Adamo. Clearly his strongest asset, Adamo’s voice is what strikes you first. When he sings, there is a tenacity and depth in his voice that forces you to pay attention; it pulls you into the room with him and makes you want to sit and listen. It is soulful yet authentic. There is no pretense or attempts to sound like anyone else. Yes his voice reminds you of Otis Redding; yes you hear the influence of Joe Cocker; yes you can picture him singing with Ben Harper; but, to be sure, there is no pretending happening here. You hear him sing and you know…ahhhh, that is Jason Adamo. You like it and you want to hear more of it." - Andrew Jed (TuneJar.com

"Adamo has a wide range, and he's expressive, gliding between notes, lacing his warm tenor around the words gracefully." - Bryan Reed (Independent Weekly)