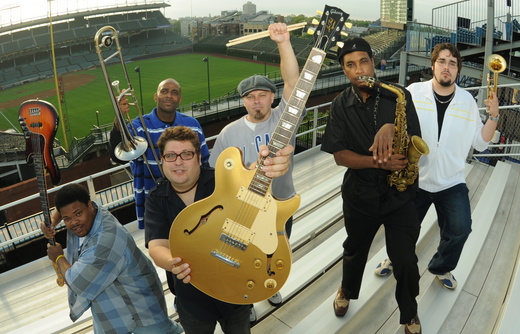 Digging deep and giving it all in everything they do Chicago’s Lubriphonic specialize in a unique offering of funky rock n’ roll. The septet’s tight and raw sound is immediately familiar, fusing the roots of soul with explosive in-your-face delivery and sensuous R&B dance music.

The Lubriphonic sound is full of precision orchestrations made up of blazing guitars, tight three piece horn lines, soulful songwriting, bluesy vocals and the habit to cut the funk loose. The best description of the band’s sound comes from Relix Magazine: “Superb, adventurous, diverse, simply mesmerizing instrumental work. Steeped in soul, rock, pop, and blues Lubriphonic's members play with a tenacity and precision that sets them apart from equally proficient bands.”

Entirely committed to continuing their mission, Lubriphonic is happy to be playing the music they love and winning over new fans each new night at each new city. “As a sideman one of the things you learned is how to be professional. I learned how to give to an audience, no matter what. That's what you’ll get at a Lubriphonic show.”

“Combine the best elements of old-school funk and edgy rock and roll, throw in some soulful R&B, and you end up with Lubriphonic, one of the most happening bands out there today... Lubriphonic draws from strong, eclectic influences, yet is cutting-edge original-- Soul Solution is a listening pleasure and a dancing treat".- John Lynskey, Hittin' The Note

“This old-school Chicago-based rocking funk and soul band kicks up the dust with a crackling three-piece horn section and enough energy to blow the fuses at this intimate venue. Its terrific originals sound like ‘70s covers and when it does dig down for an oldie, as on Curtis Mayfield’s classic ‘If There’s a Hell Below (We’re All Gonna Go),’ it’s an all-stops-pulled blast.” – Hal Horowitz – Creative Loafing Atlanta

“In fact, Lubriphonic may well cause a run on Minwax, because their fans keep scuffing up floors all over the midwest courtesy of about the meatiest blues-funk music since James Brown. We don’t just throw out nods to late great ‘Soul Brother Number One’ on an everyday basis, so you know we mean business.” – Glide Magainze

“Chicago loves it’s music. And that’s what Lubriphonic delivers: a combination of funk, soul and R&B that’s styled by their own home-grown, Chicago SW-side-style blues. The band offers their third album, ‘The Gig Is On’, highly recommended as a portrait of the Chicago Music Scene. But if you want to experience that circular energy for yourself, see them live!” – Steve Richards, Grateful Web