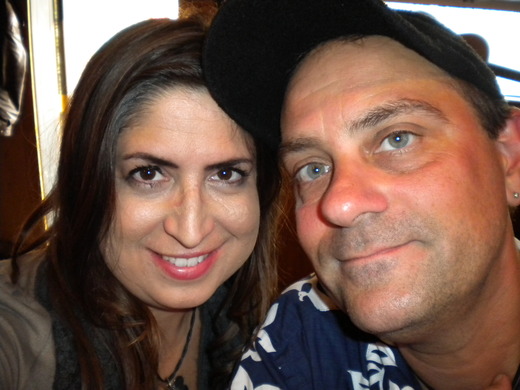 Rob Rigoni grew up in Northern Ohio along the shores of Lake Erie. Living in a city that was a departure point for most of the islands in the Western Basin of the lake, Rob remembers there always seemed to be an “island” vibe in the music around his hometown. He was exposed to the likes of; Pat Daily, The Newfolk, and of course vintage Jimmy Buffett well before he discovered rock music. Add to this the Hungarian folk music he heard on his grandparents farm, Catholic folk mass music, and parents who listened to everything from Dean Martin to Hank Williams, and it’s easy to see that the stage was set for unique and complex musical style and taste. Later when Rob discovered; blues, rock, hard rock, and heavy metal, they were simply an extension of an already varied musical palette. Rob began studying trumpet at age ten, and he played it along with the French horn all through middle school and high school in marching band, wind ensemble, orchestra, and many more musical settings. He began studying guitar at age eleven, and was fortunate enough to have two relatives who were professional musicians in the 1960’s and 1970’s. Rob learned as much as he could about both music and music business from the elder musicians. Meanwhile he took private guitar lessons and pursued self learning by reading studying from any guitar book he came across. . Parallel to studying guitar, trumpet, and French horn, Rob put together his first band in the sixth grade. They performed at school shows, private parties, and county fairs. The next six years would be a steady expansion of musical knowledge, bands, venues, and geographic range. In early 1984, Rob began to attend jam nights at the legendary rock club “The Party House” in Mansfield, Ohio, where he quickly fell in with a group of touring level pro musicians. By the end of high school, Rob had toured extensively in three states, playing both major and minor venues. They headlined festivals, shared the stage with regional and national acts, and often performed four hour shows mixing original and cover material. During his college years, Rob continued to expand his musical horizons. He studied music theory, jazz guitar, and music technology while attending Bowling Green State University, and l performed regularly around Northern Ohio. Around 1988, Rob purchased a Tascam reel to reel multi-track recorder, and began to teach himself music production. Several of his original recordings gained local FM airplay and he continues to record and produce in his own studio to this day. After college, Rob headed West to relocate in Seattle. Shortly after arriving in Seattle, Rob teamed up with singer/songwriter/musician Danielle Egnew, in a band that was markedly different than the “Seattle Sound” of the early 1990’s. Playing technically challenging and musically diverse progressive power-pop, Danielle and Rob created quite a buzz in the Seattle scene. Over the next twelve years, Rob performed professionally in and around Seattle with acts such as: Danielle Marae (Egnew), Box of Daylight, Chad Quist, Thirteen Grams, and Bad Flowers. With these bands, Rob performed at nearly every imaginable venue in the Seattle area, and played opening slots for such national acts as: Blue Oyster Cult, Berlin, Nazareth, April Wine, Starship, Molly Hatchet, and more. Rob began doing session work, playing on various artists recordings, TV commercials, and independent films (see discography). He expanded his musical education by attending The Pacific Northwest Film Scoring Institute. He studied film scoring with Hollywood film composer Hummie Mann and graduated with a certificate in film scoring. Rob’s film scoring skills were called upon when he wrote an orchestral score for the independent film “Relish”, a temp score for the film “Tiptoes”, and composed a song for the closing credits of “Tiptoes”. In 2003, Rob co-produced, wrote, and recorded the score for a nationally distributed fitness series “Lean and Fit” with fitness instructor and action star Cliff Linderman. The fitness series was extensive and required 350 minutes of original, upbeat music appropriate for working out. From 2002 to 2010, Rob toured extensively with one of the West Coast’s top special event/wedding acts. As a founding member of Maurice the Fish, Rob performed from Alaska to Hollywood, CA and all over Washington, Oregon, Idaho, Montana, and British Columbia. In addition to countless weddings, including one at the Biltmore Four Seasons in Santa Barbara, CA, Rob’s client list includes: The University of Washington, Microsoft, US Army, AA, Toyota of Canada, Habitat for Humanity, Livestrong. Over the past ten years, when Rob wasn’t in the studio or on the road with one of his bands, he spends time performing his own music in support of his self-released albums “Letters from Afar” and “Other Times Other Places”. Rob’s solo show varies from an intimate instrumental jazz show to a high energy trop-rock show combining instrumental guitar, cover tunes, and original party rock songs. He is well know for being adept of transitioning musical styles with the atmosphere of the audience, many times in a single evening. Rob has performed with his solo show at: festivals, wineries, bars, colleges, churches, and many more venues. What are you looking for in a guitarist? Versatility, great sound, experience, flexibility, positive attitide? Rob Rigoni is a technically skilled and musically intuitive genuine artist. He is the consummate professional. Rob is available for session work, tours, sub dates and more.