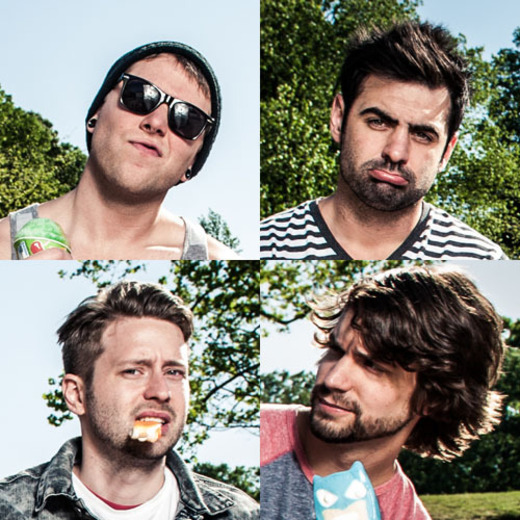 Here’s an unlikely recipe: Take classic emcee skills coupled with evolving lyrics, add pop sensibility with a dose of rock dynamics and stir. What you get is something the literary legend surely never thought he’d be a namesake to. Vonnegutt.
Taking to form in early ’07, the band quickly began generating a buzz for their refreshing and unique blend of hip-hop & rock. By the summer of 2008 they earned a coveted spot on the Vans Warped Tour in Atlanta. By 2010 they were recording with Big Boi, of the Grammy award-winning duo Outkast, performing with the likes of The Clipse, B.o.B., Chiddy Bang, and DONNIS, joining Big Boi on stage for late night television appearances, becoming part of Manchester Orchestra’s Favorite Gentlemen Artist Community, and being invited to perform at Lollapalooza and Austin City Limits.
To some, this quick success may have seemed to come easy, but be clear; Vonnegutt’s two founding members have been paying their dues for years before crossing paths. Frontman/emcee Kyle Lucas has been earning a name for himself in the hip-hop scene for years with the release of several mixtapes including his latest tapes; It’s Always Sunny In Marietta, which was presented by 2dopeboyz.com and hosted by Big Boi as well as the critically acclaimed Purple Cloud Thoughts. Meanwhile; guitarist Neil Garrard was busy doing session work for some of the south’s biggest names in Rap/R&B (Big Boi, Dungeon Family, Pastor Troy, and Kelly Rowland)…
2008-2011 saw the band spending the majority of their time working in the studio with producers Grant Michaels (Hey Monday, Boys Like Girls, Chiddy Bang), Simon Illa (D. Woods, Manchester Orchestra), Billy Hume (Lil John, Ludacris, Rehab), solidifying their lineup with the addition of Taylor White (drums), and Jimmy Conley (bass) following in the footsteps of Killer Mike and Janelle Monae by signing a deal with Big Boi’s Purple Ribbon Entertainment record label. They rounded out an incredible year with a Summer on the Vans Warped Tour and a performance at Lollapalooza.
2012 is the time of promise for the long awaited debut full length, “Falling Up The Stairs” set to drop in early Fall on Purple Ribbon/AVJ Records. Their debut single “Lights” will feature their legendary label owner Big Boi.
Never ones to just sit back, Neil, Kyle, Jimmy, and Taylor work on their own and as Vonnegutt to grow their fan base through performances and collaborations.
So it goes.