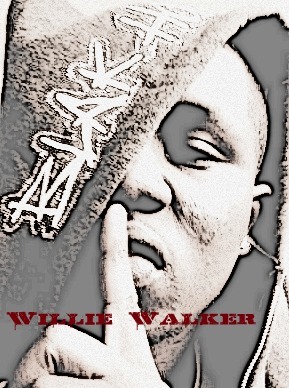 The biography of Willie Walker From tragedy to talent Irving “Willie Walker” Chislum determined to land on top of the hip hop air strip, but with different chasers of negativity, drug and night less grinds explains his soulful gridy but heartfelt style. With the industry continue to ignore pure talent, will they listen with deaf ears in fear of a new breed of a lyricist? When asked what does he think labels and artist are intimidated by his form of hip hop he responded calmly but confidently “ I feel the industry is scared of a musician with substance. Reason being its gives us the artist power in what we speak of and believe in”. Street tie keep him aggressive, passion for human well being compassionately leak from his foundation. Criticized for speaking openly but reality “Willie Walker” constantly speak out against errors in the court system, the death of his cousin (a family member who he looked up to as a kid. The real Willie Walker III), criminal mentalities, but most importantly his fight with his personal demons life it self. Often quoted to say “ you cant always measure success by fame. I measure success by how many people I can touch. If my struggles in living can be express threw poems an save some kids from the streets then its all worth it to me”. In Irving Teen years his dreams of sports as one of the premier basket ball players in the state of New Jersey an North Carolina would fade vastly. Between struggling liven in Jersey City being Verbally abuse by his step mother, and observing his father drown his past failures in alcohols such as E.J. an Brandy! This is were he realized the power of words. “ I remember vividly how words made me feel just listing to 2 Pac, and Nas, or just listening to all the negativity”. Being heavily recruited by coach Bob Hurley (The great coach of Saint Anthony’s), being watched by scouts all over the country from playing A.A.U. Chislum couldn’t balance the pressures of life and the streets of Raleigh North Carolina. Getting expelled from Millbrook high school as a senior with a 3.2 G.P.A. Life as a athlete tarnished quickly. Trails and tribulation birth the voice Willie Walker. Life after fast breaks and play formed into fast money and gun shots. A house party shooting which involved his best friend being shot who survived , an Irving known to the streets as Jerz walking from the tragedy unharmed. “The High school treated me an my nigga like we were the shooters”. This only fueled me as a rapper, but made me realize its a better way of living”. It was living that became the next problem. Livings homeless from home to home Irving fought with depression from his past failures . His therapy was his music expressing emotion on beats and breaks. It was a combination of Dedication, Determination, and a drive to be the best ever forced the position of taking control of his career by creating the label self owned Blak Houze E.N.T. The signing of his self launch the being of a street but business savvy Goliath! Irving states “Take control of your situation, if you depend on other people to live your dreams you’ll never accomplish anything. Take your goals hostage make them submit”!!! Suicide studio grinds, standing on street corners, gas stations, and performing at clubs you can find Jerz selling his signature sound of Blak therapy music. The question is will the world except his sound or will time pass by as father time drive past most musicians? Can the industry survive without heart in it’s music.