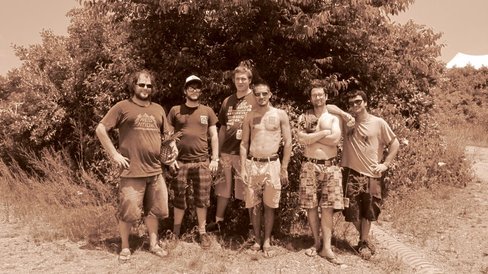 Four songwriters. Two drummers. Hip shaking calypso jams. Screaming guitar solos and huge, thumping bass lines. Ripping on the keys and jungle-ing on the congas. Party all night, straight on into the morning. Pausing for beautiful vocal harmonies only to dive back into a dirty break-beat. Get the albums because they are fantastic. See a live show because it will be epic.

Superfrog released their debut album Year of the Frog in the fall of 2008. This was an independent release and was produced by Aaron Katz, formerly of Percy Hill. They released their second album Call from the Moon (CFTM) in the fall of 2010. This was also an independent release. They are active members of The Home Grown Music Network and with HGMN’s help, CFTM went out to over 100 independent and college radio stations rising to #8 on the jambands.com national radio play charts. The single off CFTM, “Astronautical” was featured as the 2nd track on Relix Magazine’s CD sampler in their February/March 2010 edition. “Float”, also off of CFTM, was featured on the Home Grown 9 CD sampler.

And now in 2014, the much anticipated third album has arrived!! It’s a balanced but eclectic collection of material from four songwriters plus a massive amount of rock! Their third full length release will have you movin' and groovin' with a big smile on your face in no time."

"Overall, I would have to say just one word can sum up Superfrog—professional. From the way they handle the distribution of their music to their creation of a brilliant blend of jam band-ska-rock, Superfrog has a sound that can certainly draw the interest of all kinds of different fans." --Daniel McMahon, The Deli

"Call from the Moon is a rhythm of jam fused melodies that sounds both unique and effortless, backed by alluring guitars, trumpet , a solid rhythm section and Proper’s tongue in cheek vocals. The songs sound purposefully whimsical and extraordinary, with buoyant tempos and entertaining melodies. As intriguing as these songs sound, you really get a full sense of the band members “out of the ordinary” personality." --Christopher Robie, Home Grown Music Network

"Superfrog blends pop, funk, jam and progressive rock in this addictive, head-bobbing collection... The overall tone and presentation of “The Year of the Frog” result in a likable, energetic package with lots of fun attractions." --J. EVAN WADE, HomeGrown Music Network

"From the get-go 'Year of the Frog' is rife with bouncy, funky rhythms that stand up with the best of the nation's many aspiring jam bands." --MATT KANNER, The Wire

"Passion, intensity, drive, focus, humor, family, late night water-slides and a brotherly love and deeply heartfelt respect for our little green hopping swamp friends. This is what comes to mind when I think about the wild musical circus world that is Superfrog. It was a joy and inspiration to help bring this music to life in our months of pre-production and in Rhode Island with Floyd. If the Earth is ever violently attacked by a sea of green I am now prepared with a definitive "no use plan" and a proper soundtrack in hand." --AARON KATZ, Producer