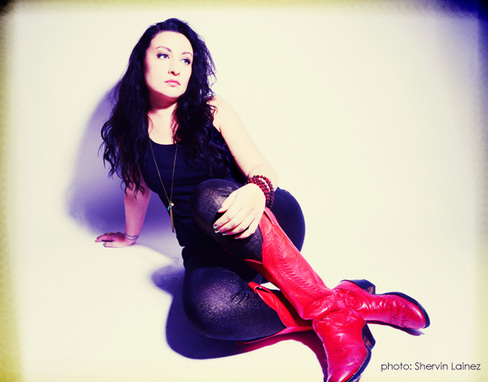 Mieka Pauley possesses a voice that flows like good whiskey and a frankness that makes Alanis Morissette look shy. She conjures up a sonic immediacy with the same masterful command as Ani DiFranco with driving, yearning melodies that stand alongside the work of Michelle Shocked, Neko Case and Emmylou Harris.

“My songs are like the actions that I can’t really take.” So says Mieka Pauley, a refreshingly candid artist whose vagabond background infuses The Science of Making Choices, her new full-length album due onJune 26, 2012.

Frequently moving about the country in her formative years, settling down, then uprooting and starting anew: No wonder her messages have a no-time-for-B.S. vibe. While her lyrics are startling–”Never fuck a woman that you don’t love,” “I promise this time I won’t be a psycho,” “I wanna wreck your home/I wanna get your husband alone”–they’re never vindictive. In fact, her confessions invite listeners to admit they share the same inner struggles and desires.

“A lot of it is true from the prospective of me thinking these things. It’s all shit that I went through in my own head, like rocking in the corner,” she says of her songs about retaliation (“First Stone,” “Marked Man”), lust and envy (“Wreck”), desperation (“Another Go”) and brokenhearted disgrace (“Never Fuck a Woman That You Don’t Love”). “But I’ve never tried to kill a man or steal a husband,” she laughs.

Not content to wait for label backing, Pauley has self-released all of her work, which includes three other EPs and two full-length albums. For Science she’s joined forces with PledgeMusic, where her fans proved their demand for more music by donating far more than she requested to fund the project. Having worked with producer Geoff Stanfield (Firehorse, Sun Kil Moon) to create The Science of Making Choices, Pauley feels she’s finally captured in the studio the same rawness she conjures when playing live. “It’s finally like me making that alternative sound while still holding on to what makes my live solo show work. He was able to take that live vibe, that connection, and then put really sweet, respectful production behind it. I really love that Geoff was able to make it happen.”

Other major plans are in the works besides Pauley’s new album release. An edited version of “Never Fuck a Woman That You Don’t Love” is a contender in the International Songwriting Contest, which includes Tom Waits, Darryl McDaniels and Tori Amos on its judges panel. Also this summer Pauley’s song “Devil’s Got My Secret” will be heard in the movie Peace, Love and Misunderstanding, which stars Academy Award winner Jane Fonda, Oscar nominee Catherine Keener and Elizabeth Olsen.