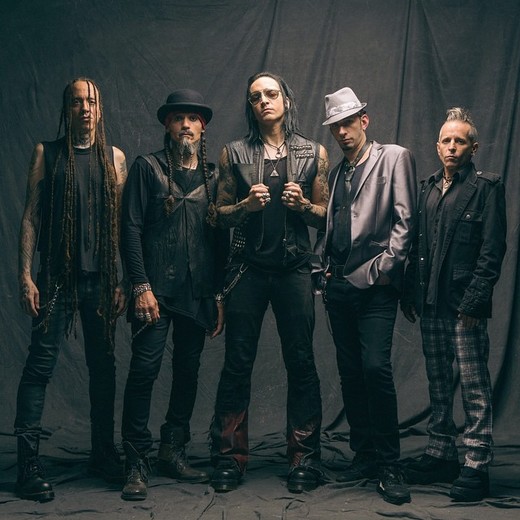 At first when you see them or hear the name Panzie, you’re not quite sure what to expect ... but expect the unexpected.This band's got it. They understand what it takes to put out badass rock 'n roll. The beauty is that it comes naturally to them. They were born to do this.
They are not a manufactured or an overproduced record company's spit-out. Each band member is a character in their own righ

t and could stand alone but to bring them together in one band is why it's so good.

Front man Johnny Hawaiian is the last real American rock star and Panzie brings something back to hard rock that has been missing. Their songs are raw, energetic and aggressive, yet there's something fine and sophisticated about their delivery.They have the "it" factor. They are everything you want in a rock 'n roll band.

Panzie is the whole package. They have well-written songs that you can listen to over and over again. You just don't get tired of listening. They look good, they sound good and they deliver a live show to match. Their full-length album, entitled 'Love & Blood,' is destined to become a classic. This album rocks from beginning to end. Every track is memorable and stands on its own; it's a hard rock album that takes you on a musical journey

'Love & Blood' is what you get when you take every great band and song you love and combine them. That is Panzie. They play music you want to hear and when you're done, you want more. Its unpretentious, meat-and-potatoes, dirty rock 'n roll. Front man Johnny Hawaiian and guitar players DC Gonzalez and Jonnie Rockit started the band in 2009 in NYC. All veterans of the NY rock scene, they were anxious to start a new band. After a few rehearsals at DC's place, they realized that there was an undeniable chemistry between them and were pleased with the sound that was forming.

Before they had a full set, they were booking shows. Panzie enjoys playing live and that was evident right from the start. As soon as they had enough tunes, they were anxious to let people hear what they were brewing. In 2009, the NYC music scene was starting to come alive again and there were bands and venues popping up all over the place. Hawaiian, DC and Rockit could not be happier -- this was where they grew up and the playground they needed to showcase themselves

They later joined forces with drummer John "Servo" DeSalvo and bass player Dave Sussman. Servo and Dave were longtime friends who had played in other bands together and instantly all of their personalities and attitudes meshed and a new and better Panzie emerged. Panzie quickly became a vital part of the NYC music scene.

And that's the thing with these guys; they are the real deal, they support their scene and love what they do. There is no way that this band will not rise to the top. 'Love & Blood' is worthy of sitting in your record collection next to your other favorites. If you have not seen them live, give yourself a treat and check them out. You will not be disappointed.
« View This Artist's Complete Profile
Connect with OurStage: Facebook Twitter YouTube FourSquare Newsletter RSS feed
ADVERTISEMENT
?Need help?
Copyright © Amazing Media Group  2006-2021
p
A
n
E
F
Song Title by Artist Name
987654d
LM
iAnEAqqqq