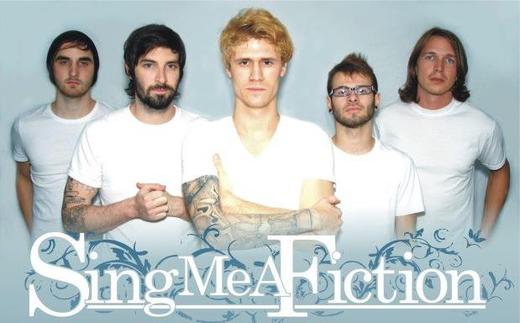 Based out of St. Louis Missouri, the indie rock band Sing Me a Fiction writes a story for the minds eyes and ears. With a story telling concept comparable to Coheed and Cambria and The Dear Hunter, and like sound to Taking Back Sunday and Circa Survive this is a new act you are sure love. Its music that tells a story and with the release of every record they intend to do just that.

The group was originally formed as an acoustic side project of singer/songwriter Adam Smith. After graduating from the music business program at the Musicians Institute in Los Angeles, California, Adam returned home to St. Louis. There he and former friend and band mate, Nick Blackburn (Drummer), really brought the project to life. A few short rounds of "band member musical chairs" later and they found the group that fit just right. By acquiring the skills of Gentry Hewitt (Guitar), Katy Durrwachter (Piano/Vocals), John Pelhank (Bass), and Ryan Felps (Guitar), they completed their first full length album titled, "Hole in the Sail". After completing the CD the group and Katy parted ways for different musical goal. Katy now plays in a St. Louis Local folk band called, Dots Not Feathers.

Currently the band is writing and recording their second full length album and story titled, "I'll Get Back to You". It is sure to be much darker and an over all higher energy album compared to their last.