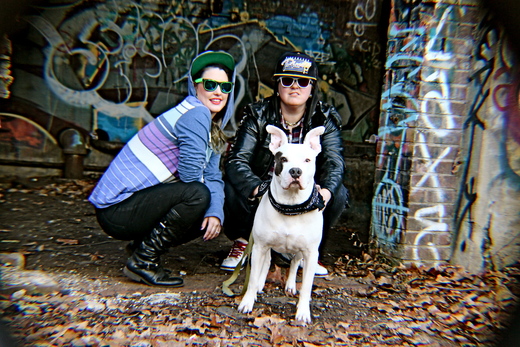 Music’s got a long history of impressive duos, from Simon & Garfunkel to Method Man & Redman. There’s just something special about a tag team of two distinct personalities joining forces for a singular musical mission. That brings us to Central Connecticut duo — Prank Skate. These two forge together pop and hip hop into an irresistible and inimitable hybrid, affectionately dubbed, “Hip Pop”. Meet the 21st century’s premier pair. After getting engaged  in 2010 and always having music be a huge part of their relationship, Tessa & Jenn began formally making music together, creating their own beats, singing, and rapping. Soon afterwards, they dropped “Enxtravaganja” online, and the response was instantly overwhelming. They performed shows in their house, at parties, and local venues and slowly developed a fervent fan base. However, their 2012 debut Mix tape High Rise elevates the playing field for them once again. Boasting the track “Breathe Out”, their “Hip Pop” sound takes the spotlight.  About the track,  Jenn explains, “We basically wanted to create something with a new and unique sound, but also something irresistible and catchy.” Then, there’s the single “Without You”, which nods to the classic R&B/Pop sound with a raw emotion of starting a new relationship and all the feelings that come along with it. “That one is a song that melts people and they really connect to the emotional end,” Jenn explains. “It’s something that everyone feels with a new and exciting romance.” says Tessa. In many ways, the title High Rise embodies the group’s journey thus far. Tessa affirms, “It’s the whole grind behind music and trying to make it. We’re all Chasing Dreams, and it’s amazing that our dreams are coming true for us, and we truly feel like this is our High Rise.” Their mentality and spirit continually resound through the hyper enthusiastic ranks of fans supporting them. “We have a really close relationship with them,” continues Jenn. “We engage all of them through social networks. They’ve been with us from the ground up, and their support strengthens us.”

Ultimately, everybody’s invited to join Jenn & Tessas’ party. “We want our fan base to make positive memories when they hear us,” says Tessa. “We want them to associate it with moments like finding a best friend through music or getting through a bad day. We’re so passionate and driven that we just hope our influence is a good one.”

Check Prank Skate out on