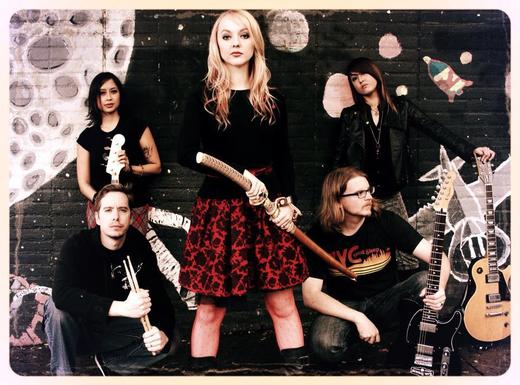 An emerging female-fronted alternative-rock band, The Dreaming Society’s music has been in several popular television shows. Most recently the song “Mirror Mirror” was featured on Abby’s Ultimate Dance Competition Episode 7: “Happily Never After”. Other shows include MTV’s True Life, MADE, Teen Mom, and NBC’s The Voice. Formerly known as The Patchwork Quilt Fallacy, The Dreaming Society’s song “Slip Through the Static” from their first full-length album “(R)evloution” won them the 2010 OurStage.com opening slot for national acts Hanson and A Rocket to the Moon, at the House of Blues in San Diego. The band’s most recent album, “The Dreaming Society” was released in February 2012.

“Imagine the big wall of sound a la Smashing Pumpkins, but without Billy Corgan’s self absorption and big shiny head.” (Domenick Moore, Shinbone Magazine). “Most of the songs here thunder out with the full throttle, corset popping, floor length skirt billowing, dragon training, guitar-fueled bombast you expect from the genre. The real surprises are “Father” and “Skyline” – ballads that showcase Shelah’s stunning vocal abilities. Hayley Williams, watch your back.” (Falsetto Prophet, Amazon.com Album Review).”You’ll see Shelah’s ethereal vocals often compared to artists such as Sarah McLachlan, and her voice certainly has that broken Irish beauty, but oh so much more power. It is a heartbreaking counterpoint to Karl’s relentless guitar that brings you to your knees” (Kara Kumpel, of Anime Insider).