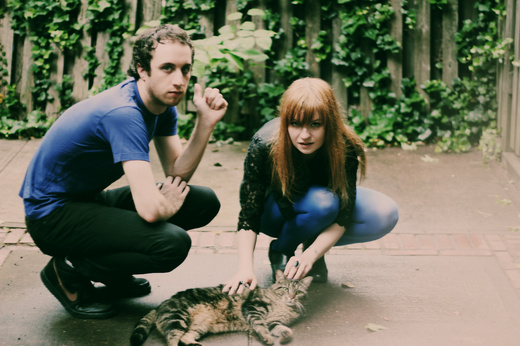 WOJCIK is a two-piece rock band from Brooklyn, made up of Hailey Wojcik (on guitar, vocals) and Geoff Lewit (on drums). My Old Kentucky Blog says "They sound mighty fine at volumes that may disturb others who may be in the room with you." Their raw, burboun-fueled sound is influenced by bands like Black Sabbath, X and the Cramps, but with a distinct edge of its own. Hailey is a Michigan native, and the duo describe WOJCIK's music as Midwestern Gothic.They released their debut EP, the VOY-chek EP in the fall, followed by a cover of LCD Soundsystem's "I Can Change," and are currently working on a full-length album, Wise Blood, to be released in the fall.

"...the perfect album to swallow with a few shots of bourbon. It just has that biting rawness that looms in a dark whiskey bar where the vocals escape through the poorly insulated windows causing people to stop and listen on the streets." -Volume City UK