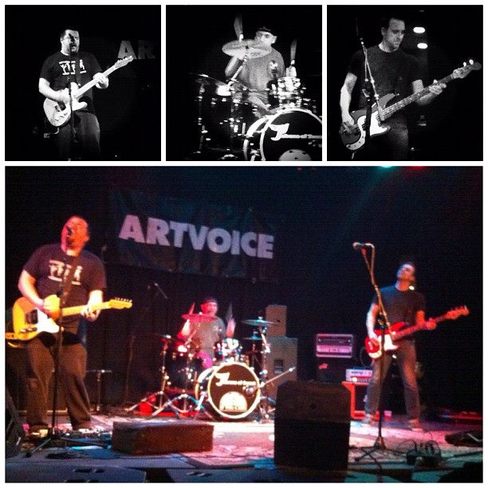 Patrons of Sweet - A brief history….

Wanting to evoke the sounds of indie rock from a time more guitar-laden akin to that of the early and mid 90’s ala Drive like Jehu and Chavez, Buffalo music-scene veteran Vic Lazar (Union, Maceo Ruez, Vox Humana, Knife Crazy, etc.) started Patrons of Sweet towards the tail end of 2007. The initial line up featured Jason Weixelbaum (L’dorado, Dimetrodon) on drums and Dianne Gilleece (Jeez Luweez, Bad Ronald, Dimetrodon) on bass and quickly got underway crafting strong material and cultivating some solid local and regional support with hyper-frenetic live delivery. Bands such as Superchunk and Archers of loaf were reference points for sure, immediately proving Lazar’s aim was on target. The trio went in and tracked “Go Whatevers!” which was loaded with anthems and powerful hooks and released this with the support of Mark Constantino (The Exit Strategy) and his self-starter label, “Headless Actor.” The track “Gold Cake” ended up released on a local compilation released by Jason Draper (Failure’s Union) entitled “Means to an End.”

Patrons of Sweet as the initial trio lasted through March of 2009, following a series of solid outings out of town, with the band making regular appearances in Syracuse and Rochester and getting out to Brooklyn and Boston a few times to garner some regional attention as well. Following a rhythm section swap in April of 2009 with Dave Borden (Nurse Brown, Vox Humana) on drums and backing vocals and Matt Lavin (Sugar Pill) on bass, Patrons of Sweet immediately re-galvanized the band in a more technical and math-rock oriented direction. The newly formed trio learned some of the former material, along with cultivating a powerful set of new songs, which they immediately went into record. The result was “Nothing Drastic,” a 12 song volume of high energy and catharsis. POS self released this in December of 2009 and has since then recorded 17 more songs, 13 of which will be released early 2011.
« View This Artist's Complete Profile
Connect with OurStage: Facebook Twitter YouTube FourSquare Newsletter RSS feed
ADVERTISEMENT
?Need help?
Copyright © Amazing Media Group  2006-2023
p
A
n
E
F
Song Title by Artist Name
987654d
LM
iAnEAqqqq