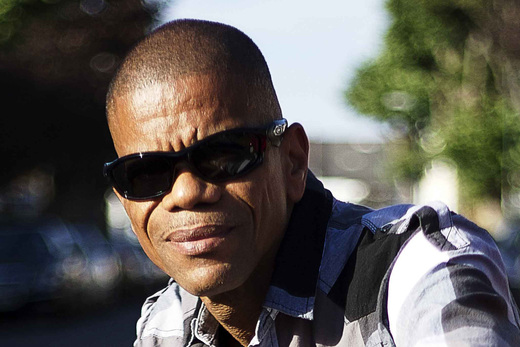 “He is a very gifted artist and the passion of his music comes through smoothly and solidly in the lyrics. Truthful messages are woven with precision into every verse. It would be a wonderful thing if all could hear him”.Charles A. Smith, The Entertainment Bank.
Appearing recently at Club Gravity, New York as part of the Ocean Breeze Music Festival’s Caribbean Brightest Stars line-up, Lenny Deneb delivered an amazing performance that had the audience hailing it as the best performance witnessed since the death of Lucky Dubie.
Lenny Deneb, originally born in St. Lucia, Eastern Caribbean, but raised in London, United Kingdom writes conscience provoking songs. His critically-acclaimed debut album ‘From the Sanctuary’ released under the artist name D7 includes such songs as ‘Pirates’, ‘The Begging Game’, ‘Families At War’, ‘U Can’t Run Nor Hide’ and others. The lyrics come at you with the velocity of an arrow shot from a bow. Lenny’s songs are the result of experiences based on his work with young people and families in crisis in the field of social science and the ‘injustice system’. These songs tell stories of social upheaval, injustices and lost dreams. However make no mistake, just like his music heroes Bob Marley, Bruce Springsteen, Ocean Colour Scene, U2, The Police, Peter Tosh, Lucky Dubie and Lenny Kravitz among others, Lenny’s ultimate message is one of love, and that the human spirit can endure much and still emerge victorious. The latest album ‘Solidarity’ includes remastered versions of ‘Pirates’, ‘The Begging Game’, ‘Families At War’ and others as well as never before released songs like ‘Senseless Violence’, ‘The Father’s Victory’ and ‘Settle The Score’.
Lenny’s fusion of reggae & rock is a unique blend and a formula that takes reggae into another dimension and the Solidarity CD has been enjoying an enormous amount of airplay globally on RADIO ARCADIA, LG 75.COM, WCVY RADIO, ZONA ROCKS, WAER RADIO, WCVF FM, MUSICDISH, RADICAL FM, HIPP RADIO, OTTIC FM, OFF THE CHART RADIO, XIT RADIO, RAGNAROKK, HOT96 FM, LAST FM and many more. Similarly the promotional video to the song ‘Settle The Score’ continues to be aired on cable channels such as TEMPO, CALABASH TV, SHINE TV, CARIBVISION, CHOICE.
This energetic performer who was a founding member of Greensleeves Records fairly-well acclaimed British reggae outfit Cygnus has been described by the British music press as exciting, impressive and intelligent in his writing. His brand of reggae-rock combines the styles and influences of his aforementioned musical heroes, and he continues to develop the sound as work on his next album progresses and the result of which will be reggae that ROCKS!!!!!!!