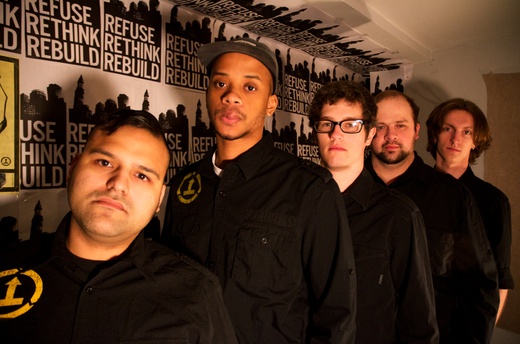 Dead Ellington is a 5-piece punk rock assault hailing from Boston, MA. Their songs are driven by energy from start to finish, filled with heartfelt lyrics, explosive drums, and a wall of guitars. The band itself is comprised of five friends who share a common bond – the wish to create good music together and the need to share it with the world. The band released the original Refuse, Rethink, Rebuild Split EP with the now defunct Blue Letter Days in 2006. After a hiatus and a line up change, in 2011 Dead Ellington has released their first full length, Refuse, Rethink, Rebuild.

Refuse, Rethink, Rebuild is a new way of thinking. It is about looking at the reality of ones surroundings and creating something new. It’s all about refusing the present, rethinking the future, and rebuilding the past. “It’s a way of life not just music, it’s our manifesto, embracing the D.I.Y scene from street art to punk rock.”

Always looking to take music further, and hoping to bring an edge to Boston, the band continues to write the anthems of today. Over the past 7 years Dead Ellington has shared the stage with countless up-and-coming bands, as well as several national and touring acts. They’ve played with bands such as Big D and the Kids Table, Kicked in the Head, The Lawrence Arms, The Planet Smashers, Suicidal Tendencies, and The Loved Ones.  They have also appeared at several of Boston’s premiere rock clubs, including Paradise Boston, TT the Bears Place, and The Middle East Downstairs.

Dead Ellington has a commitment to show the world what they are made of and collectively, they believe that they can take this band to the point of touring nationally, and eventually internationally. As stated in the track “City Lines”, “We can make it, We can make it if we try”.

“What Dead Ellington came up with inspired me to do something on a different local level. I now run a collective that books shows all over the city of Detroit as independent as possible. we call it defiant culture. Our motto TAKE BACK, RETHINK, REBUILD, DEFEND. It was inspired by them! Put music and art back in the hands of the creators.  This is our world our lives! Profiteers stay out! I believe the next level should be what Dead Ellington is putting across. Let’s level these cities, the monetary system and our government. RETHINK. And make this world a better place.”