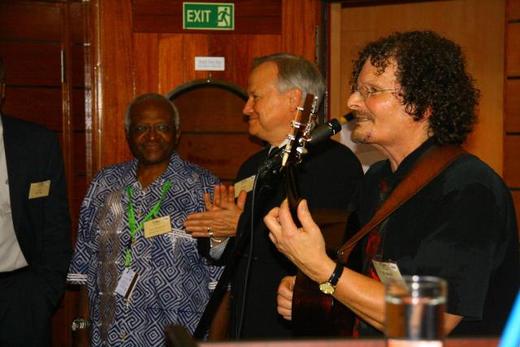 Bob is a well known and respected musician and author. He plays every style from classical to country to rock and jazz. His international tours have included the UK (London , Leeds and Edinburgh) Europe (Barcelona, Dortmund, Slovakia) and Africa (Tunisia, Casablanca,Capetown). In 2007 he toured around the world with Semester at Sea and special guest Archbishop Desmond Tutu. Concerts included Brazil, South Africa, Vietnam, Japan and Hawaii. His second world tour featured concerts in Cadiz Spain, Ricks Cafe in Casablanca, Capetown, Shanghai, Kobe, Tokyo and Guatemala. He has played with Chuck Berry, Bobby Vinton, Mickey Gilley, The Green Bay Symphony orchestra and Spyro Gyra to name a few.He performs at all Green Bay Packer Home games with the official band. His best selling Guitar books are published by Mel Bay. In 1999 his song "The Sad Fact was a #1 hit on the contemporary jazz charts in France. His solo guitar and vocal performances are a unique and mesmerizing blend of genres.
NEWS FLASH-Bob played with Astronaut Chris Hadfield while Chris was aboard the Space Station in the NASA music group BANDELLA at EG7 in monterey CA