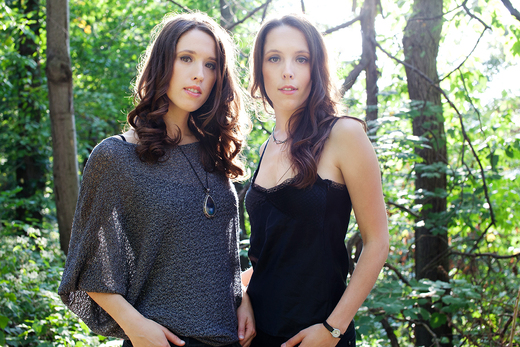 Conservatory trained singers and songwriters, sisters Jessa and Beth Callen of The Callen Sisters have played music together since their teens and first attempted to start a band when both were students at SUNY Purchase. “What makes us unique is that we have a harp in our band (played by Jessa) and that our voices blend in a freaky-weird sibling way,” says Beth. They have dazzled audiences with performances throughout New York City, Boston, and Philadelphia. They were featured on BBC Radio in Wales and received a rave review from Harp Magazine who called their music “deftly textured, at times subtly baroque, pop-rock.”

The sisters have just announced their new EP The Light Bringer Project, which they will release track by track starting this November. Their album is a collection of 6 tracks about “shining a positive light on social issues and uncovering truths.”

Their third release since they came together as a duo in 2006, the siblings have opted to give their music an edgier, more pop sound with a more focused message. Beth says, “We wanted to create songs about social change, coming into your own power, and truth.” The first single “Silhouette” presents a more pop-oriented sound with the sisters’ signature sparkling vocal harmonies, to be released on November 29, 2012.