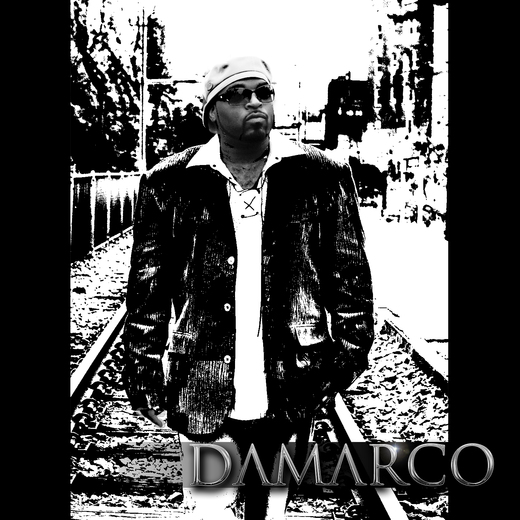 There are singers and there are artists. Singers sing songs, but artists tell stories. Singers can rouse a crowd, but true artistry rouses the soul. The beauty of Damarco’s voice and craft is that it has the undeniable feel of classic R&B storytellers, weaving the exceptional tales of their lives throughout their music. Making modern R&B feel like the testimonial pulpit from whence it came.

Damarco may not have come up in the often mean streets of Philadelphia with a dream of weaving his tales through music, but it happened anyway. The way it often does, with a mentor who sees potential. Then a school or a church choir comes into play to harness skills. And then, when the necessary musical seeds are sown, the opportunity to turn potential into artistry happens. For Damarco, that opportunity was being a part of several singing groups that performed in and around Philadelphia as openers for well-known talent like Dru Hill and Brian McKnight. As the buzz for Damarco’s powerhouse voice was just about to boil over, the loss of his mother changed his life and the direction of his career forever.

Damarco’s musical journey took him to the performance stage as a solo artist to round out his craft. Anywhere he was asked to sing, he did. To get his chops right. He’s sung just about every R&B standard worth a listen and in doing so, created demand for his gift. He’s been called “Philly’s Best Kept Secret”. What’s not a secret is Damarco’s ability to raise folk out of their seats with only the power in his voice and the soul in his songs and simultaneously sweep his audience into his world.

Not unlike the most beloved classic R&B performers, the ladies absolutely love Damarco and his vibe is that of a seasoned pro, crooning on stage for and about the love of the ladies. Damarco says of his showmanship, “Butterflies are always there for any artist. But the moment I touch the mic it’s a whole different feeling. It’s like the room opens up for me. As soon as the crowd opens up, it’s like I can give them everything I have and they receive it.”

Damarco’s showmanship isn’t surprising. He takes his cues from musical icons like Stevie Wonder, Donny Hathaway, The Temptations, Gerald LeVert, Earth Wind and Fire, and Teddy Pendergrass. While Damarco’s sound is uniquely his, his performance is steeped with the lessons of the legends. He says of his musical influences, “I’m an energy kind of guy. It’s mainly their auras. Studying the greats—their auras, their energy—what I’ve learned from them is how they impact their audiences. How they mesmerize them and draw them in.”

Somewhere in Damarco’s journey, he discovered that the “love” song is a dying breed and felt the stirring to bring it back. His debut release “Denial”, written by songwriter/producer and music licensing guru Keath “Lion” Lowry, is a prime example of where classic R&B meets new school bounce. Damarco’s mission as an artist is not only to bring the love back to music, but to showcase in his artistry, the love IN music. To that he has been known to say, “Welcome to Damarco’s world.