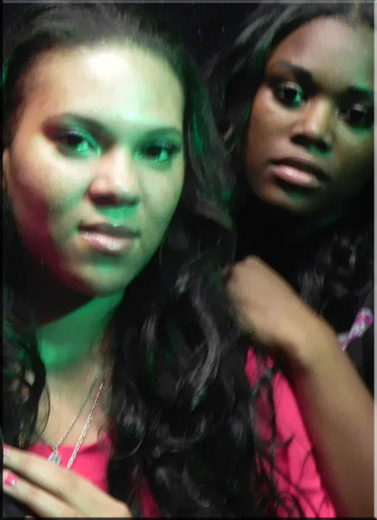 Seductive, sultry, talented, a girl group phenomenon! Breaking the mode of the "ordinary" by having 1 rapper and 1 singer, Darje' has elite talents of singing, rapping, writing, and dancing, this girl group is certain to be on the rise. Established in 2002, Darje' consist with a songstress Admyriar, and the MC Brittany, Bri S.C. Da Swagga Chick. The many changes, determination, and inspiration, Darje' has the momentum and drive to make it to the top. R&B with an edge is the definition of the starletts, bringing nothing but raw and pure music, song after song. It is certain that they will be a house-hold name. *Its Darje' Bitches!* Admyriar (22): The girly girl with an edge, dramatic hair, 4 inch stilettos, and baby doll dresses, she has always had the niche for fashion! Seducing the track with her soft voice and writing her edgy r&b songs, she always gives the variety that everyone can vibe to. She is hard-working and surrounds herself with other committed people who believe in her vision. "I want to always be around those who have a positive outlook on their goals. People who grind, 24 hours a day, 365, you just can't have negative people around when you're trying to succeed." She says while trying on her new shoes, "I just love music and I just know that God has something planned for me in this group. With him ONLY everything is possible." With her faith in God, shes knows that this group is destined to make it to the top.

BRi S.C. - Da Swagga Chick (23): She spits by the name of BRi S.C., but was brought into this world as Brittany Johnson named by her deceased father. An encounter with the impressive, down to earth, honest and real, ground-breaking music of BRi S.C. "Da Swagga Chick" is nothing less than powerful. Behind the lyrics of this 23 year old, black, female hip-hop artist on the rise is a strong-spirited woman with a story to tell. Singer/Songwriter/Rapper/Dancer... She has the passion, dedication, and courage to create a style of music she calls her own. "I believe that originality is key. I can't see myself trying to talk, sing, rap, or dress like the next person. I want people to like me for the music I make, not because I sound like someone else. Thats why I named myself the swagga chick" Brittany says. She continues, "I believe in setting the trend instead of following it. Thats what separates me from most, cause I really don't care, Im inspired by many but I follow none." She has written songs for many Brittany's inspirations include Beyonce, Lil Wayne, Alicia Keys, Kanye West, Lil Kim, Jay-Z, Keri Hilson, Ne-Yo, Foxy Brown, The Dream, the up and coming Nicki Minaj and herself. She loves many genres of music such as old school, hip-hop, rap, r&b, pop, reggae, and rock. Becoming a songwriter/artist is BRi S.C.'s ultimate goal, and with God by her side guiding her, she won't stop until she achieves it.