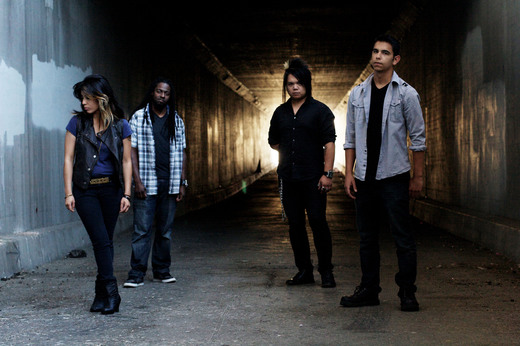 Singer-Songwriters Dean Dichoso (Guitar/Vocals/Programming) and Krista Lee (Vocals/Guitar) met at the end of the 2008 summer.  Armed with a penchant for 90's turn-of-the-era rock, dark, pensive and experimental music, scotch, and timeless songs, they needed to tell a few stories of their own.  Both writing music and penning lyrics, they started an alternative/hard-rock band that year and called it Dead End Amelia. They assembled their cast for this live band several times over the years until the dust settled and long-time friends William Dorsey (Drums), and Diego Ruelas (Bass) joined the project.

Dead End Amelia's music may be described as "Art-Rock,"  most likely due to the band's hard rock, metallic sound with progressive ventures into ambient, even urbanesque trip-hop and alternative-indie sounds.  DEA has released two EP's to date, There's a Bright Side to All of This (2010), and The Point of No Return (2011) and a full length album The Sound of Awakening (2012).

The band is steadily attracting the hearts of new fans due to their prolific release of new media materials such as high-quality rehearsal videos, and new music at a quick pace between larger releases.  DEA has performed to an ever-growing audience that has resulted in sold out performances in their local Los Angeles scene.  The band is road-hardened and will be playing across the US in support of the debut album The Sound of Awakening.