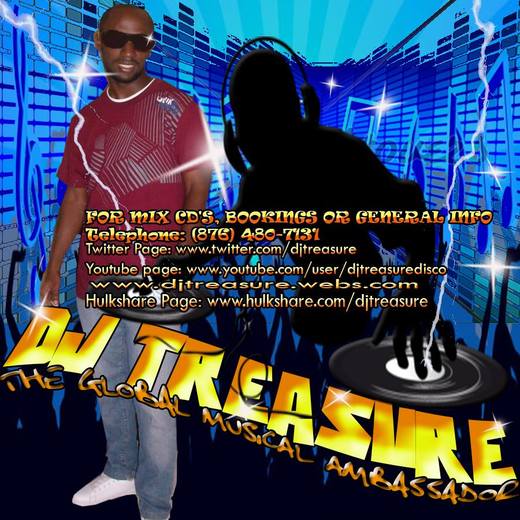 DJ Treasure is arguably one of the most gifted DJs Jamaica has been blessed with. His stage name reflects his ability to mix music in a way that keeps you hunting and wanting more. Treasure was born in 1986 in Kingston, Jamaica to Annette and Bing. Like mad ants on a wall just before a rainy day, DJ Treasure commands your weddings, parties, dances, reunions and set ups like no other, and does this with ease through genres, styles and eras. No venue is too big or too small to be bombarded with DJ Treasure’s electrifying sounds.

With music as his passion since primary school, he was mesmerized by Richie Antraxx’s (community selector) work at the turntable. Though he has now formed his own, he salutes persons like Sky Juice, Mad Ras, ZJ Chrome and ZJ Liquid for being motivators to his craft; along with his inspirations; Beenie Man, Nelly, Kelly Rowland & Tifa.

He was introduced in May Pen in 2006 and has been that eclectic taste ever since.

Give him what’s due to him as a DJ who never fails at uplifting others and himself. Though he takes any event by storm he has been creating other storms as he sets out to elevate not only his community but an entire Parish and while doing all of this, this awesome DJ takes time out for himself to pursue a BSc. in Information and Communication Technology.

What more could you ask for, not only does he proves dominance in his craft; he also maintains a strong educational path. A TRUE role model to the meek at heart. Indeed, a Treasure of all Treasures.