The Adobe Flash Player is required to watch videos on this page
Print p.gudda's EPK 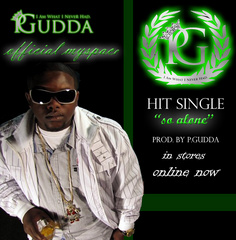 How are you doing? To whom ever may be reading this, thanks for your time. Anthony ( Younggutta ) Johnson was born on Sep. 27, 1986. THe oldest of 7 in a single parent home. he began to love music in the 3rd grade. He played in the band a throughout grade school. By age 12 he started writing music and started to take it seriously at 13. Though he tried to get into a studio for years, no one would take him seriously until he hit the age of 17 when he rushed into a contract with Powerhouzz Pro Entertainment. The longest to last with the company, he stayed with them for five years. However, he never made it big due to issues within the company. He even took years of Artist Development and still went nowhere. He feels the company held him back and wouldn’t let him push himself in the street or anywhere for that matter. He took off and moved to Atlanta in hope to make it, where he records himself and tries hard. Originally from Miami, Fl. he still holds his head high. Thanks for your time. Younggutta i'm gutta what more can i say you wanna nknow more check out my myspace with this email younggeegutter@yahoo.com

i don't have any just happy yo do me amd hungrey so i gotta eat.

fans on myspace by myspace
Posted by Pangea Music on Mar 29 at 10:09 AM EDT • hot as hell!!!! love from florida to florida!!! keep representin us well, fam!!
fan by ourstage
Posted by Mr. Politrix on Mar 29 at 7:11 PM EDT • Dade county in the building...POLITRIX STAMPS MR. LIBERTY CITY...GET IT IN HOMIE
myspace by myspace
Posted by Southernstyle on Mar 9 at 12:38 PM EDT • i really like the track
fans by ourstage
Posted by King Daveheart on Mar 29 at 10:30 AM EDT • damn this track is fire! cant get enough of it...
p
A
n
E
F
Song Title by Artist Name
987654d
LM
iAnEAqqqq