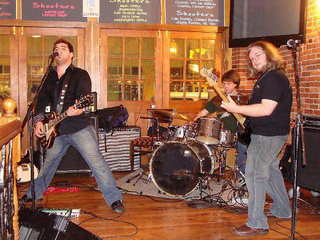 39 Goodbyes are a dynamic three-piece pop/rock outfit from the Lehigh Valley. Lorenzo Bubba's ability to relate to the fans with his sincere recollection of the past, both good or bad, is what initially draws fans to the band. Add Billy Voight's well-thought out low end and Tim Walter's steady limbs and you've got yourself all the ingredients for a good time. In the year that they've been together, they've kept a busy schedule, playing at any and all situation possible, from festivals to birthday parties, and from dive bars to chain restaurants. Seeing as they play out, in one form or another, more than three times a week, it shouldn't be hard to see them somewhere near you soon!