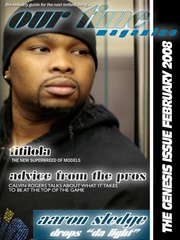 ENERGY, PASSION, ELECTRIC, GRABBING, JAW DROPPING ARTISTRY. Aaron Sledge is the guy that goes on before the last act and people say "He's the one that should've closed out the show!"

This talented trendsetter is a proven writer, singer, arranger, performer, and producer. A native of Chicago, Aaron's vision is to unveil a new face in the music industry. While preparing to release his first solo project, he desires to open doors for other artist who just need an opportunity.

Aaron has appeared on The Jay Leno Show with artists such as Nelly, Avant, Akon, and Jazzy Pha. He's worked with Smokie Norful on the Celebration of Gospel and appeared on Yolanda Adams' "Day by Day" DVD Recording.

As a songwriter, Aaron has been featured on Mario's multi-platinum "Turning" Point Album for the single entitled, Here I Go Again". He has worked and gleaned from such great writers and producers as Warryn Campbell, Harold Lilly, Ramsey Lewis, Nephew, Tyrese, Michelle Williams, Eric Dawkins, and Making the Band 4 just to name a few.

Nothing makes a better foreground singer than being a strong background singer, and if you follow Aaron's career you will find him in every genre of music today: Christine Aguilera, Smokie Norful, Yolanda Adams, Kevin Vasser, and Bridgett Campbell. This is just a small glimpse into some of his accolades as an artist.

Aaron believes that his music is a breath of fresh air, and others would agree using terms like "refreshing" and "easy listening" to describe what they've heard. The sign of true musicianship is that of one who can create not a new sound, but a culture of music that is non exclusive and yet consistent to the times. Aaron is at the forefront of making sure it does just that.

HOMELESS CHICAGOAN TURNS INTO MUSIC SUPERSTAR by CHICAGO TRIBUNE RED EYE
About a decade ago, Aaron Sledge, 33, was homeless. Now, with his life back together, he's turned that experience into motivation for his music. 'Hold On,' my first release, wasn't just inspired by...
p
A
n
E
F
Song Title by Artist Name
987654d
LM
iAnEAqqqq