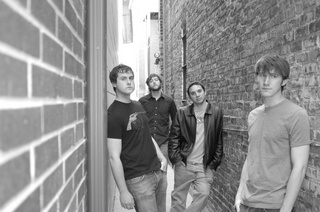 These are words that have been used to describe Algren, a fresh rock band from Chicago that has burst onto the local music scene with their unique blend of introspective lyrics, searing guitar riffs, grooving rhythms and dynamic songwriting.

Algren has hit the ground running, quickly building a repertoire of songs that are difficult to label into one specific genre. Known for their inspiringly energetic sets, Algren has played gigs at numerous Chicagoland bars and clubs throughout 2007 and 2008, including highlight performances at Double Door, Cubby Bear, Elbo Room, and Martyr’s. The band is quickly building up a devoted fan base with the help of various media outlets, such as Fearless Radio, the Red Eye, Rock Chicago on CANTV-19, The Local Tourist, and 97.9 The Loop which featured Algren’s “Bled” on Erin Carman’s Local Music Monday program.

All four members are dedicated and driven musicians, performers, and promoters looking to make a name for themselves in the regional and national market while performing the music they love. The group recorded a new demo in December and looks to record a full-length album for a summer/fall 2008 release. Please feel free to contact the band via AlgrenMusic@gmail.com.
p
A
n
E
F
Song Title by Artist Name
987654d
LM
iAnEAqqqq